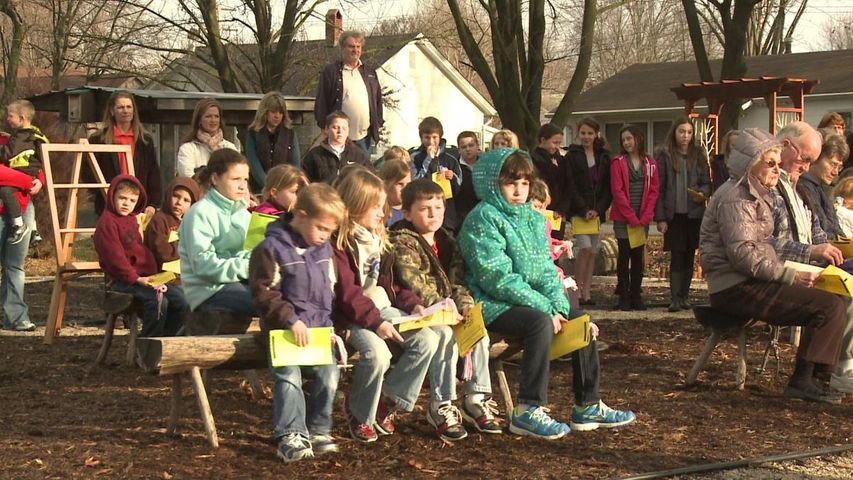 MONTGOMERY CITY - Students from Immaculate Conception and Montgomery City Elementary schools filled the seats of an outdoor classroom Friday to remember the victims of the Sandy Hook tragedy in Connecticut.

Students gathered for a peaceful tree planting ceremony that welcomed everyone in the community. Teachers said the goal of the ceremony was to promote unity, and to encourage the community to take a stance against violence. Students planted two dogwood trees in one hole, so as the tress grow, they remain intertwined. Local religious leaders attended the ceremony to bless the trees and offer words of wisdom and encouragement to the community.

"This is just a way to invest interest in one another. The trees show our unity and connectedness, and we have to remember that we are all connected," Pastor of Immaculate Conception Father Russell Judge said.

"It really meant a lot to me that the school cared that much about what happened in Connecticut," Paige Oden, a sixth grader at Immaculate Conception said.

The tree planting touched parents as well, as it is an attempt to stop violence in the Montgomery City community.

"I'm the parent of three small children, so it means a great deal to me to do what we can to stop violence in schools," Rector of St. Matthews Episcopal Church Christina Cobb said.

Father Judge said he hopes students will gather every year during the first week of school to acknowledge its significance to the Montgomery community.