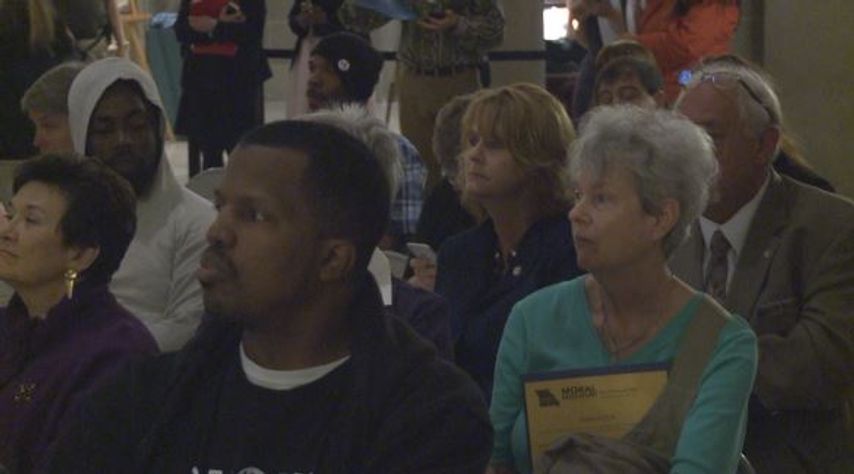 JEFFERSON CITY - A coalition of organizations rallied at the state capitol Wednesday in support of a "Moral Missouri."

The coalition was comprised of 12 different organizations and included Planned Parenthood, the NAACP and Empower Missouri.

The group voiced its concerns over proposed legislation it said would violate civil rights.

"Clergy and advocates who care about health care are converging here today to send a message to our legislators and very importantly Governor Greitens," said M'Evie Mead, the director of policy and organizing with Planned Parenthood advocates in Missouri.

Mead said the current agenda is discriminatory to women and minorities.

One bill of the coalition's concern was Senate Bill 43 sponsored by Sen. Gary Romine (R-Farmington), which would alter discrimination lawsuit requirements.

"Senate Bill 43 is a piece of legislation that has only one aim, to allow people who violate other individuals to not have any responsibility in that action," said Nimrod Chapel Jr., Missouri NAACP President.

Chapel Jr. said the bill would make it harder for minorities who have been harassed in the work place to take their harassers to court.

"We want to make sure we have litigation that is balanced for the business as well as employees," he said. "We want to protect our employees from discrimination but not to the extent that it's a detriment of our businesses and having businesses coming into our state."

The bill passed the senate in March and is now working through the house.

Another bill of concern was House Bill 194 introduced by Rep. Diane Franklin (R-Camdenton), which would prevent individuals from donating fetal tissue of miscarriages or abortions to any medical or scientific entity.

"As a woman of faith, I think people get to choose how to honor what happens to them," Chimene Schwach, a member of the Columbia Planned Parenthood development committee.

Schwach said she is a Catholic and wanted to show faith and progressive ideals do not have to conflict.

"Every other surgical procedure we have, whether it's a removal of a lesion or anything else, from an individual patient is sent in its entirety to the pathologist for examination," Swan said. "This is no different than that."

Despite Swan's comments, administration standards for the Ambulatory Surgical Centers states staff of each facility should develop a policy on which tissues shall be sent to the pathologist for review.

House Bill 194 passed the house was read by the senate for the first time on Tuesday.

The coalition visited lawmakers offices and had nine speakers from the organizations address the group.

[Editor's note: This article has been updated with regulations from Ambulatory Surgical Centers.]