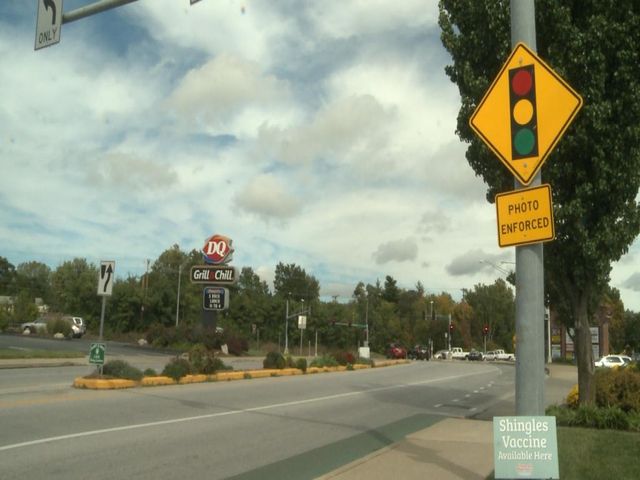 COLUMBIA - Drivers in Columbia were more likely to get a ticket in the mail from one of the city's red light cameras, thanks to a new policy from the city council. The number of citations the Columbia Police Department issued in the month of September increased to 203 from just 46 the previous month.

Columbia Police Sergeant Curtis Perkins said this increase is likely due to the policy change city council approved in August. The change allows police to issue a red light citation without a clear image of the driver's face captured by the cameras. Before the change, police had to be sure the driver seen in the red light camera picture was recognizable as the owner of the vehicle.

"The change in the ordinance allows us to send it to the registered owner," Perkins said. "So in other words, we had an effective tool but we weren't able to take action on it by the way the ordinance was written. So this ordinance change allows us to hold those responsible for the act of running a red light."

This increase in citations issued also means increased revenue for the city. Of the $120 fine, $44 goes to the company that installed the cameras, and according to the Columbia Assistant City Manager Tony St. Romaine, the other $76 goes to the city's general fund. This means in the month of September, red light camera citations brought in $11,932 more to the city than from citations in August. St. Romaine said the money is put specifically toward police and public safety.

Kimberly Bromeier received a ticket for running a red light before the change in policy, and is not happy it will be easier to get a ticket. She said red light camera tickets are not being used for just safety reasons.

"I feel like traffic violations, just in general, are just for money. If it were more for the safety of the people, I feel like there would be more officers around," Bromeier said. "Seems to me, it's always at lights where there are a lot of people and very congested where you're going to have people try to push through a light because they've been stuck in traffic all day."

Perkins said that the red light cameras are important for the city and help do what officers can't always be there to do.

"It's hard for officers to enforce red light violations because the officer also has to see the violation at the red light, would have to go through the red light as well, have the chance of getting hit and putting the public in danger," Perkins said.

He said while the policy change was likely the main reason for the increased number of citations, it could also be attributed to the return of college students to town. He said regardless of the cause he hopes the cameras are a deterrent for people running red lights.