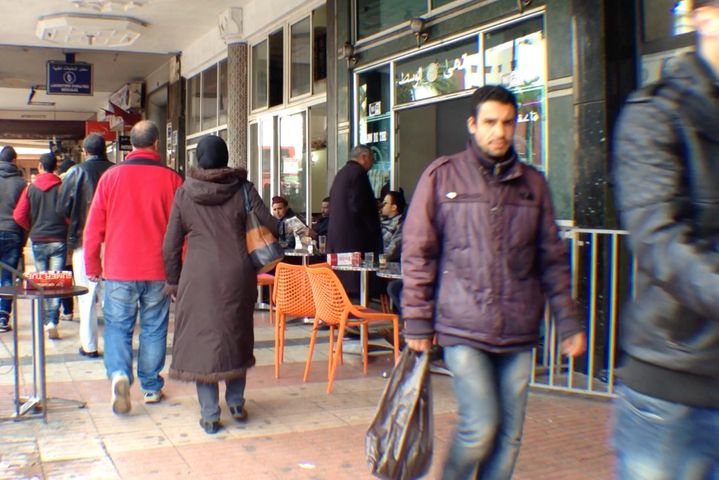 MEKNÈS, MOROCCO - It's a cool November evening. Cafés line the major avenues of Meknès, Morocco, many bustling with customers. Some people are crowded around tables, sharing stories, discussing affairs of state, political or religious theology, even sports, over a cup of coffee. Some are engaged in intense conversation, some have their chairs aimed towards the soccer game on television, others observe those passing by on the street.

But to the foreign eye, particularly a Western one, the people inside the café make for a surprising sight. Every one of them is a man. There is not a single female among them.

"The public space is not a space for women," said Hollie Baker, an American student studying in Morocco.

It's a glimpse, perhaps the most visible one, of a much larger issue that has become one of the most prevalent, most heavily discussed issues in this North African nation.

Twenty-year-old Maryame Chayat has lived in Meknès, Morocco, her whole life. She has been aware of a gender divide for several years, something she became aware of on her own.

"We have no rights, because we have no freedom. We don't feel like humans," she said.

A casual observance of the streets of Morocco during the day versus at night reveals the drastic difference in women's exposure to the public in contrast to the western world. Women go about their business during the day in Morroco, but at night, the assumption the woman is a prostitute.

"Every time I walk out my door I know, I know that at least from my apartment to class is an open window for approximately five to ten cat-calls; and it never fails."

Twenty-seven-year-old Mouhsine Boukharsa has lived in Morocco all his life. The street harassment is something he has a particular hatred for. Boukharsa admits, though, it will be hard to change.

"It works," he said. "I've seen so many girls, stopped by boys in the street, ‘hey what's up, how are you doing?' and they change information".

For women here, street harassment is just part of life. Dr. Ouafae Bouzekri is a Moroccan feminist and professor of Gender Studies in Meknès.

She said a complaint about the harassment to a police officer is likely to do little good and that an officer is typically "not aware that is something that bothers you."

The gender divide in public exposure comes from a deep history of strict gender roles. The traditional structure has been enforced by society for generations in the Arab world.

Even before Islam came to north Africa, families and communities often treated women brutally. Families were likely to be displeased with the birth of a little girl.

"They even killed the baby, if they have a girl baby, they bury her alive," said Boukharsa, describing the ancient practice of infanticide, something the Prophet Mohammad is said to have outlawed.

With the introduction of Islam in the Arab world, came the interpretation of the Qur'an and the Hadiths, the daily practices of the Prophet Mohammad. Men did those interpretations in large part, something many feminists blame for what they call a skewed understanding of gender roles.

Historically, women in an Islamic society were expected to remain inside the home. In some cases, they lived in "harems," places where male "masters" had multiple wives whose jobs were to essentially wait around until the master called upon her to have sex or to help prepare a meal. Other women, servants, lived in these homes to make the food and clean the quarters.

In rural areas, women became the ones to do the hard labor of farming. Meanwhile, the men traveled to urban areas to get work and send home a wage. Women in the rural villages were often arranged for and even sold into marriage. Girls as young as nine were married off, and some were pregnant as soon as they hit puberty.

"Families, they should, when they get married, after the night when the husband and the wife spend it together, in the morning, the next morning, they should show everyone a white sheet with the blood. Show that she's virgin," said Boukharsa, describing an old tradition that is still practiced in some parts of Morocco.

"Thanks God things changed after independence," he said.

More change came in 2004 with the second Family Code, or Mudawwana. Women were given the right to initiate a divorce and polygamy was made so difficult it is considered by many to be nearly impossible.

She said it "gives more power to the judge and it depends on the orientation of the judge. If this judge is a conservative, religious person, he might be reluctant to apply the Mudawwana as it is," Bouzekri said.

More effort for change came in 2011, with a new constitution that guaranteed equality between men and women.

Mouhsine Boukharsa said when people see the inequality from a political angle they think "okay man and woman are equal." But, he said, "in the street they are not."

That's largely true within the family structure, too. For many conservatives in Morocco, progressive changes that depart from the traditions they're used to, are hard to swallow.

"It's still happening now," Chayat said. "Girls get no education they just stay at home, clean the house, and wait for the husband; and they want that too, the girls, because they grew up in a family that's all about marriage."

Daniel Ostad, an ex-patriot who has lived in Morocco for several years said, "Go out into the country. There are a lot of really wild, old, fantastic mentalities that you can't imagine still exist and are still going on today. But they're there and that's the family education which is keeping it there."

In the country, he said, it's different. Even bringing up gender roles, let alone the idea of changing them, is off limits.

The traditional method of inheritance is still popular with a lot of families, rural or urban, in Morocco. Upon the death of a family member, males receive twice as much as females, including the wife and mother of the deceased.

"I pay the same taxes as a man," said Bouzekri.

She said she and her husband share responsibility for their family. "So I feel like it's really hard that he will inherit more than me, you know, I find that unfair."

Dating can be difficult even in more progressive families, too.

Boukharsa said, "Girls here, if they have a boyfriend they hide it. They really hide it, you can't imagine how they hide it. But they do."

Bouzekri said a lot of the resistance to changing gender roles has come from religious people and movements.

She said much of the resistance stems from the idea that it's being copied from the West and said the common belief is that "anything that comes from the West is really a sin."

For many religious people in the Arab world, the west represents a secularization of society and a denouncing of religion.

"From the religious point of view, this is something that is immoral. Not just in Islam but in all religions," said Bouzekri.

Boukharsa said, "What is the solution? How we can change this? How, is education."

Bouzekri said, "If the textbooks have this, talk about this, show women that are in higher positions and not just stick to this traditional role of the woman as a nurse and the man as a doctor in the pictures of the textbooks and so on, I think in that regard it will change a lot."

Moroccan women can vote, drive a car, and hold a job - more rights than they would have in some other Arab nations. But for many, it is not enough, especially in the world of politics.

Ostad said, "There's an imbalance on the planet because most of the countries have heads of state, companies, which are in control and they are led by men."

Some women have come to hold powerful positions and represent a changing Morocco in the public eye. Certain members of the royal family, including Lalla Aicha, a princess, have become symbols of the Moroccan feminist movement. Aicha's father, King Mohammad V, publically unveiled her shortly after independence, sending a strong signal for feminization by the royal family. Female activists and politicians have followed in her footsteps in the decades since.

Still, while Morocco struggles through change, the behavior of men and women on the street is an open window to the past. Baker said she feels it when she walks past a full café on her way to school.

"For me, being white and foreign and female, you can just feel the glares," she said. "It's hard to get rid of, it takes a long time to change culture."

Bouzekri said, "I think the media always plays an important role in changing the mentality. I find it's hard to change the mentality in a society. It doesn't change quickly."

Boukharsa summed it up this way: "We're all human!"