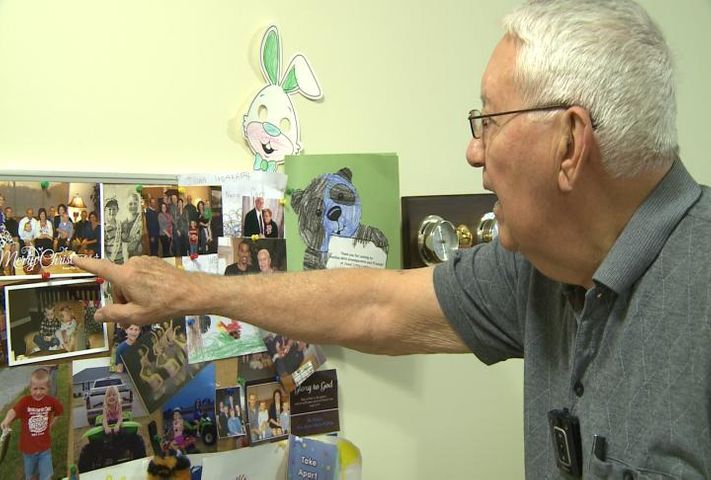 COLUMBIA - New research shows motion sensors in the home could alert caregivers to early warning signs of trouble in aging patients, well before they get sick or suffer a fall.

"They watch everything I do," said Bob Harrison, 85, describing the motion sensors in his apartment at TigerPlace.

The nursing care coordinator at TigerPlace said the research by the University of Missouri is helping to promote the continued independence and health of seniors.

"They can pick up changes in activity throughout the day that the resident is having," Katy Musterman said.

Harrison is one of 25 residents who volunteered to be monitored as part of the study.

"I just ignore them so they're not a problem for me at all," he said.

There are anywhere from 10 to 15 motion sensors in research apartments.

Motion sensors are located over every doorway or place where an activity would happen.

"We also have the bed sensor that measures pulse and respiration and bed restlessness," Musterman said. "That lays under your mattress so the resident never feels that; never knows that it's there."

The array of sensors also include a Microsoft Kinect product that can detect a change in stride when a person is walking, as well as stride length and any type of stride pattern.

Jessie Back, a social worker at TigerPlace, said "Once a month, I do a fall risk assessment with 13 of our residents here who have the Microsoft Kinect in their apartment."

"Basically it's a balance test. We collect some other health data to kind of get a baseline and see how they're doing throughout the project," she said.

While there are no cameras, the Microsoft Kinect does pick up visual images.

"They're more of a silhouette image than like an actual person," said Back.

Sensors in and around the bathroom monitor signs for an impending urinary tract infection.

The goal of the research is to communicate problems early with a physician and help prevent the patient from becoming chronically ill.

"We can really detect illnesses about 2 weeks earlier than they would otherwise be detected," said Musterman.

She said the program has been very successful with keeping older adults out of the hospital.

"This is pretty unique, pretty groundbreaking research," she said. "As far as actually implementing it in a facility, I think we're pretty one of a kind."

Back said residents are very positive about the research.

Harrison said, although his health has been good recently, the motion sensors offer him some peace of mind. "I'm glad to have these because it's sort of like having a doctor watch me to make sure I'm staying healthy."

"Yesterday, I drove over to Montgomery City to go to church and to visit some friends that I hadn't seen for a long time," said Harrison. "No one got upset with that, and I was gone most of the day."

The AARP has raised privacy concerns about the monitoring, including who is being monitored and who has access to the data.

"Everything is confidential," Musterman said. "Any images that we collect are pixelated so they're completely de-identified. There really have not been any privacy concerns."

Back said that while some of the research is ongoing, successful elements are already being utilized.

"We've actually implemented the early illness study into our daily care," she said. "We're receiving health alerts and just acting upon those normally."