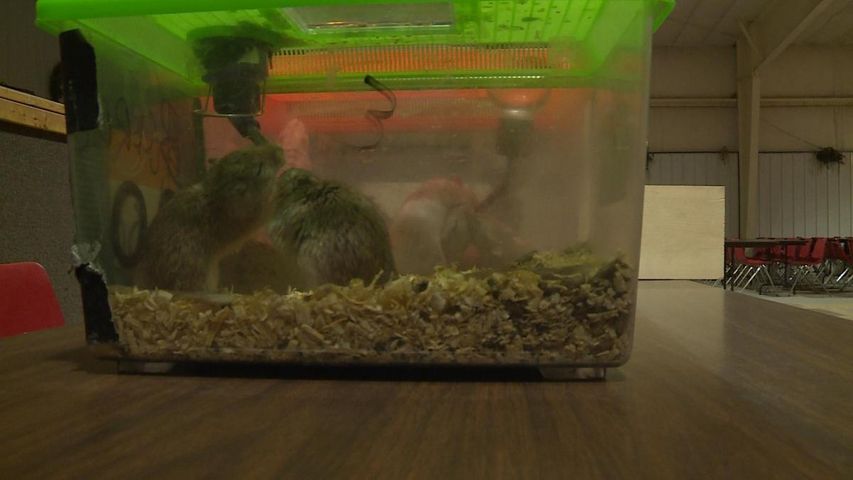 KINGDOM CITY - Close to a dozen gerbils huddled in their translucent cages, greedily nibbling on food. 14-year-old Tyson Jones picked six of them randomly and placed them behind a wooden barrier. A long glass pane covering one side of the contraption revealed a separate level for each creature.

With a flick of his wrist, Jones removed the barrier, and the gerbils dashed across the length of the device. The rodent in the number three slot won to the delight of onlookers. The animals don't need cheese or other treats to get moving.

Bets were waged Friday on 10 heats of gerbil racing, in addition to "mouse roulette," a silent auction and the sale of lottery tickets at the First Callaway Cup Mouse Race, organized by Rotary Club of Fulton. The proceeds from the event at KC Country in Kingdom City supported the Coalition Against Rape and Domestic Violence (CARDV).

Jones has helped put on these "mice races" with Mouse Race STL for about three years with his father, Tom, and his 11-year-old brother, Nolan. On any given Friday or Saturday night, the company runs eight of these events and use a collection of the 150-200 gerbils that live in the basement of their home.

Mary Ann Beahon, public image chair for the Fulton Rotary, said the organization wanted to be unique in order to bring more people to the event.

"We wanted to do something different," Beahon said. "We figured that if we did something different we have a chance of attracting a big audience, a lot of money for CARDV, which is thought that doing a mouse race would be a good way to do that."

Beahon said the money raised by the event will be matched by Rotary District 6080.

CARDV Executive Director Erica Nanney said the fundraiser came right in time. A grant used by the organization to help provide counseling for victims of domestic violence ended in February.

"Right now one of our biggest needs is counseling and to spruce up the [office] so when people walk in, they feel like they're worth something," she said.

"Chances are, if it hasn't happened to you, it's happened to someone you know," Nanney said. "That's part of the reason why it's so important to get the word out on CARDV, so women know where they can turn."

CARDV's 24-hour help hotline is 573-642-4422 and more information about the organization can be found on their website.