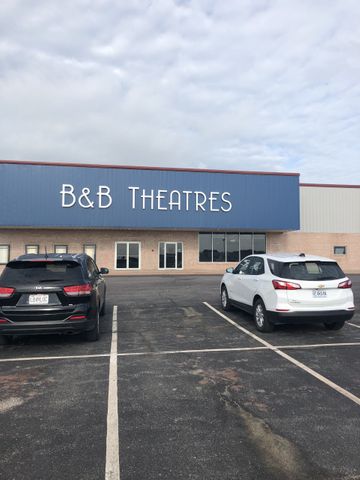 MOBERLY - Movie lovers have something to be excited about: some theaters are starting to reopen.

The B&B Moberly 5 and Drive reopened its inside theaters on May 15 after opening its drive-in theater back in April. Although open, the theater has implemented new procedures to ensure that attendees are safe and practicing social distancing.

Paul Farnsworth, a spokesperson for B&B Theaters, said making sure the theaters are safe is the biggest priority.

“We have aggressive and heightened cleaning routines, with special attention to high-traffic areas and high-contact surfaces,” Farnsworth said. “All occupied seats are sanitized with CDC-approved sprays between showtimes, and all employees are wearing masks or face shields.”

Theaters are also limiting the amount of contact between employees and patrons.

“We are alternating point-of-sale stations and have plexiglass barriers between guests and employees at each register,” Farnsworth said.

The theaters will not be at capacity— occupancy will be restricted to 50% of the maximum and seats will be reserved to allow spacing.

“Our ticketing software is uniquely qualified for this circumstance, allowing us to block off adjacent seats when tickets are purchased,” Farnsworth said. “No theater will sell beyond a capacity that would compromise social distance.”

The theater’s reopening has been a highlight for some Moberly residents.

Nevaeh Harms, a theater-goer from Moberly, said the changes to the theater have put her at ease.

“I found out about the theater reopening through Facebook and there were pictures of what it was somewhat going to look like,” Harms said. “I think the seats now, since they’re leather make it somewhat more easier for them to clean.”

While the theater in Moberly has been open again for just over a month, residents of Columbia will still have to wait for large theater chains to open once again.

Cineworld, owners of Regal Columbia & RPX, recently pushed back its reopening from July 10 to July 31.

“Honestly it hasn’t been that bad,” Leach said. “But when you’re just trying to watch a movie at home, nothing really compares to going to a movie theater, you know?”

Ragtag Cinema, which is only open on weekends, remains the only open theater in Columbia.

With Goodrich Quality Theaters, owners of Forum 8 in Columbia and Capital 8 in Jefferson City, declaring bankruptcy in March, the reopening of these theaters remains uncertain.