MSTA convention brings in teachers from across the state 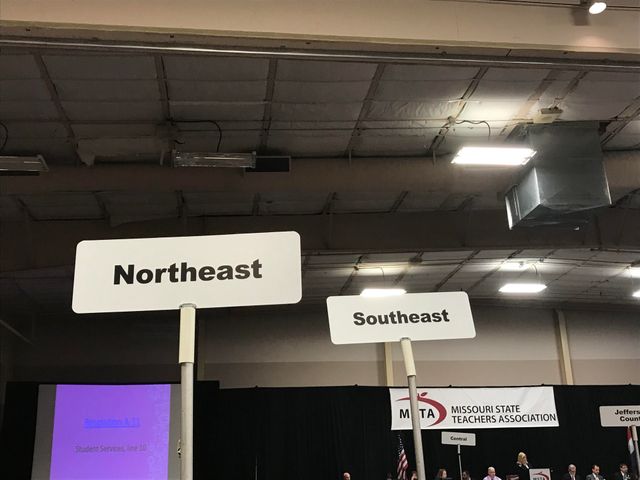 COLUMBIA - Educators in the Missouri State Teacher's Association will work through new bylaws adopted by the association, and recommendations from the governor on Friday.

On Thursday, members met to discuss and pass new resolutions, as well as listen to Governor Mike Parson speak about his dedication to funding and supporting education.

Parson asked the assembly of educators to help him with unemployment in Missouri.

"65 to 70 percent of people in the state of Missouri do not have degrees," Parson said. "A lot of that is our workforce. We know from a national level, you have to have more than a high school degree."

Parson reminded high school teachers that they have an obligation to make their students think about their futures.

"How do we take that freshman, that sophomore, that junior that senior whatever it might be, and really have that discussion of, 'Where are you headed?'" Parson asked.

The delegates also voted on new resolutions to adopt. They approved several, including one aimed at supporting student programs in the aftermath of a student suicide.

They also elected a new president, president-elect and vice president.

"Especially following a contentious election cycle, we have got to work together to get our message out to the legislators," Nickie Jones, a business education teacher at Camdenton High School, said.

Jones was chosen as the next president-elect for MSTA on Thursday. MSTA elects their future presidents a year early, where they serve under the current president for a year, and then take over.

"With this position, that will just allow me a little more opportunity to get out to different areas of the state and get to see how the different region associations operate," Jones said.

Nic Vasquez moved from his president-elect position into the president position, which was held by Tonni Schmidt during 2018.

On Friday the teachers will listen to keynote speaker John Antonetti and then break into workshops to work through the resolutions that were passed early in the week.