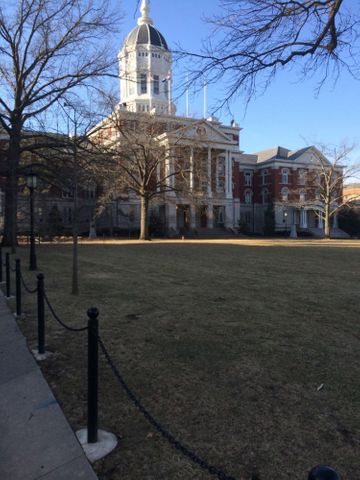 COLUMBIA - An advocacy organization in Washington, DC is accusing MU of breaking the law in emergency medical training.

The Physicians Committee for Responsible Medicine will submit a formal request to the Animal and Plant Health Inspection Services Thursday. The organization is asking the APHIS to investigate the use of live pigs in emergency medical training by MU's Columbia School of Medicine. PCRM says current emergency medicine residency training at MU violates the Animal Welfare Act, which is enforced by the USDA.

"There is a requirement in the Animal Welfare Act that says you have to do a literature search and justify that use, either by reporting that there are no alternatives or you did find alternatives, but they were inadequate for your purposes," Pippin said. "We claim that this a violation because they did find an alternative, but they did not provide an adequate explanation for why they were not using the alternatives."

"The third violation that we reported is that the (university's) Institutional Animal Care and Use Committee (IACUC) failed in its duty to enforce the Animal Welfare Act when it approved this protocol, despite those two violations."

Christian Basi, Director of MU News Bureau, said the university is aware of the upcoming complaint.

"We respectfully disagree with many of their assumptions," Basi said. "We take the care and use of our animals very seriously. We understand that they are providing us with a crucial piece of information and we would not be doing the research unless we felt that there was no other way to do it."

Pippin also said MU is the only institution out of five emergency medical residency programs in Missouri that use live animals for training.

"MU is among a small minority of schools in the country using animals," Pippin said. "Our survey has 170 emergency medical programs and 89% of them do not use animals."

A 2004 study conducted by the University of Virginia found that 87% of emergency medicine residency programs in the country provided live animal laboratories for procedural training.

Basi said MU has reviewed different methods of training yearly and are continuing to look for alternatives.

"Currently, we use approximately six animals a year for specific instances of training," Basi said. "Every other time, we're using simulations and we always try to review that each year to determine if there is new technology available that would allow us to do simulations instead of live animals."

Pippin said PCRM became aware of MU's use of live animals in emergency residence medical training by requesting and obtaining public records from the university.

"We track this information for a number of areas of medical training," Pippin said. "Once we had a list of accredited emergency medicine residency programs in the United States, we started contacting them and asking for information. We didn't just choose Missouri. We did not know at that time that they were using animals, but when we got the public records, we followed that up with our information supporting the replacement of using animals for procedural training."

"It's substandard training," Pippin said. "The standard of practice in America in the 21st century is the use purpose-designed simulators to train these procedures."

Basi said the university will continue to look for alternative methods that are as effective as current methods.

"We would not be doing the research unless we felt that there was no other way to do it," Basi said. "As technology has become available, we have switched from using live animals to simulations. And as technology changes, we will hopefully be able to reduce the use of our animals."

Several national organizations say the use of animals in medical training is needed, including the Association of American Medical Colleges and Foundation for Biomedical Research.

"It is the association's firm belief that further restrictions on the use of animals in biomedical and behavioral research and education threatens progress in health care and disease prevention," the AAMC states on their website.

"Computer models and cell cultures, as well as other adjunct research methods, reduce the number of animals used," FBR states on their website. "But there is no way to complete replace animal testing and research because the pathway to fully duplicating a whole, living system does not yet exist."