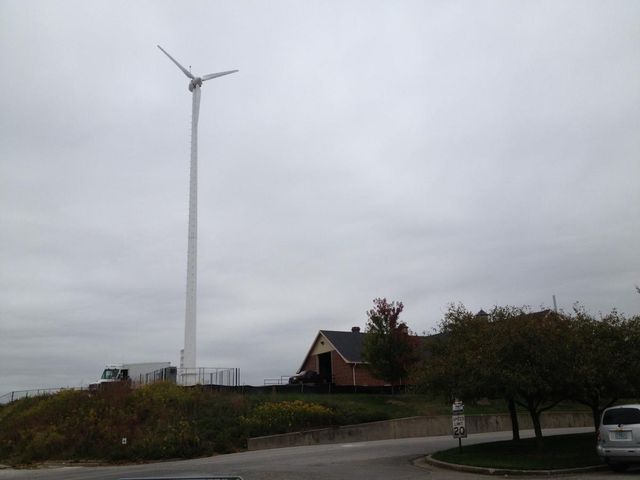 COLUMBIA - A new tower has popped up on the University of Missouri's campus, part of the campus's Climate Action Plan to use less fossil fuel energy.. The 100-foot wind turbine is located next to the Hearnes Center near Stadium Boulevard.

The turbine will provide electricity to the Beef Barn, a campus facilities building located right next to it.

"The primary reason for the wind turbine is to create a learning experience for the students and professors. So, they can come over and monitor the wind turbine for research purposes," said Campus Facilities Communications Manager Karlan Seville.

The highest wind speeds found in the state of Missouri are in the northwest corner of the state. Columbia Water and Light recommends utilizing solar energy for smaller projects for going green at home.

"The winter is the windiest part of the year, so there may be enough energy produced to generate a whole building. But the sun's power is so much more powerful and able to reliably provide power whenever it's needed," said Kacprowicz.

University officials said they located the turbine on a hill to get the best wind speeds in the city.

"It's elevated on a hill so that we can fully utilize all the wind energy, even the little we get in a city," said Seville.

"In a city, you can have a lot of variations. You can travel throughout town and not feel like there's any wind and then travel through part of Columbia and the wind hasn't stopped. There are different places up on hills that's windier and different pockets where the wind speeds are higher depending on the topography of the land," said Kacprowicz.

As part of its Climate Action Plan, MU is also working on a bio-mass boiler and solar photo-voltaic panels at the power plant.