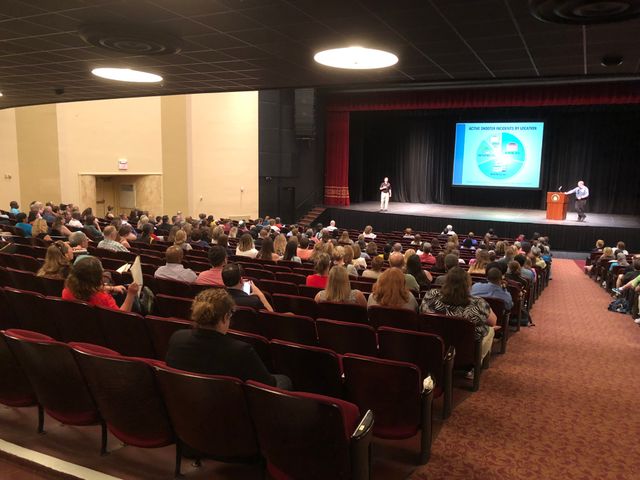 "I think this was a really good opportunity to not be afraid of the topic so much, and just kind of get some exposure on what I can do to prepare," she said.

The training comes after the most recent school mass shooting in Santa Fe, Texas, where 10 people were killed and 13 people injured.

Participants at MU learned how to take an active role when reacting to active shooter situations, incorporating environmental design, technology and communication, law enforcement response and action by possible victims.

Although the training on Tuesday was more lecture-based rather than hands-on, MU staff member James Lane said knowledge is power when dealing with active threats.

"If something like that was to happen here, and me coming here and learning something, I would know what to do more, instead of just panicking and freezing," he said.

Donna Garcia, a faculty member who works with the MU Extension 4-H Center for Youth Development, said she has an additional responsibility because she teaches.

"I think it's really important that, as a leader, I need to be prepared because I might have to help others, the youth, help them to be prepared as well," she said.

The FBI defines a mass shooting as "a multiple homicide incident in which four or more victims are murdered with firearms within one event, and in one or more locations in close proximity." However, a broader definition describes mass shootings as events where at least four people are injured, not necessarily killed.

Garcia said people should not think they would never face an active shooter situation.

"We can't bury our heads in the sand," she said. "This could happen anywhere, and any of us could be unfortunately involved or be victims. We want to make sure that we are as prepared as we can be so that we come out alive."

Botonis said students, as well as staff, should take part in training opportunities like Tuesday's.

"Things like these are happening in universities and high schools, in big student areas," she said. “I think that, if we can know what to do to be prepared, we could make a big difference in how these scenarios play out."

Botonis said, despite mass shootings across the nation, people should not live in fear.

"It's stressful, and it's hard not to worry all the time," she said. "We have to do our things every day that we normally do, and just do what we can to be prepared and know that if it does happen, what can I do to have a better reaction time, what can I do to make sure that I can help the situation."