MU celebrates 106th homecoming with a weekend of events 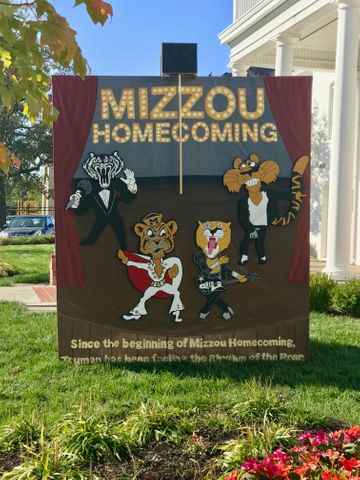 COLUMBIA - The University of Missouri kicked off it’s 106th Homecoming Weekend on Friday. It’s a weekend full of tailgates, talent and tradition.

This year’s theme is Rhythm of the Roar, but it’s not really all about music.

“To us, it was really more about how being the flagship university of Missouri leads us to have a very large and diverse student body,” Homecoming Tri-Director Cole Edwards said. “While all of us come from different backgrounds, we have different experiences and interests and majors and the like, we all come together with our own individual spirit to form one roar of Mizzou.”

To start the celebrations, House Decorations are displayed throughout Greek Town from 6-9 p.m. on Friday night.

Different Greek pairings have decorated boards and put together a skit that reflect different MU traditions or events. Some of the themes include Kissing the 50 and the influenza outbreak of 1918 which cancelled homecoming that year.

Taste of Columbia will also be happening during House Decorations. A number of food trucks and vendors will be parked around Greek Town while families, students and staff visit the different houses.

Also on Friday night, starting at 8:30 p.m. is the Spirit Rally. People are invited to join MU’s spirit quad, marching band and Truman the Tiger as they celebrate the weekend on Tiger Plaza.

Saturday morning at 7:30 a.m. begins the Homecoming Parade. School organizations, Greek pairings, different sport teams and the Chancellor will all be walking in this year’s parade.

“Hopefully everyone comes prepared with their coffee,” Edwards said. This year’s parade is one of the earliest.

With the recent construction downtown, the parade’s path has been slightly adjusted from previous years.

“We’re lining up on a little bit of different streets this year just to work around the construction,” Homecoming Tri-Director Baylee Francka said. “We have to shorten it a little bit in areas and lengthen it in others to get everyone fitted in.”

At 11 a.m. Mizzou football takes on the Idaho Vandals. The last time MU played the Vandals was in 1963.

During the half time, the 2017 Homecoming Royalty will be announced. One King and Queen will be crowed.

Over the past few weeks, MU students have also participated in one of the nation’s largest blood drives, painted windows of downtown stores with spirit, and taken part in multiple different talent shows.

Over 80 organizations are involved in this year’s homecoming festivities.

The University of Missouri’s Alumni Association is also hosting its second Hall of Fame, a luncheon that celebrates different individuals for their work.

“We recognize different individuals who that have really given back to Mizzou and have really gone above and beyond in their dedication,” Edwards said.

This year, basketball legend, Norm Stewart, is being inducted.

“We are very proud to have the first homecoming, and as we believe it, the best. I think that just carries over to show not only as a pride point, but you can see it in the Columbia community,” said Francka.

“Everyone is on board and ready to help out with homecoming in any way possible, despite early times, staying up late, doing other things and making sacrifices in the name of Mizzou homecoming, everyone has been really happy to do it which makes it a lot of fun for all of us,” she said.