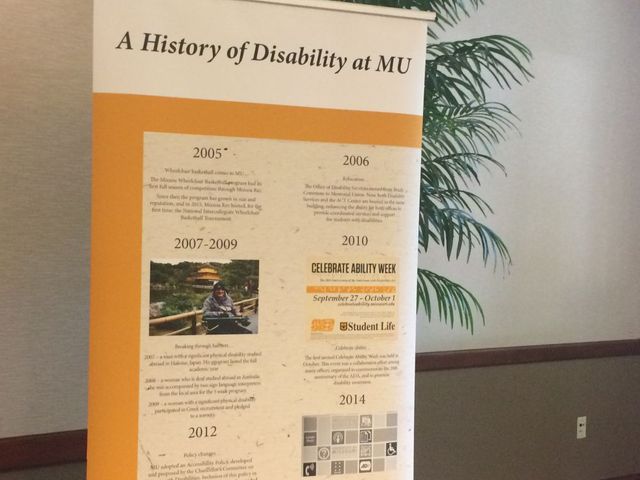 "Creating and maintaining an inclusive campus starts with all of us," Interim Chancellor, Hank Foley said at the first State of Accessibility event.

The first change being made to MU's campus are the renovations of Lafferre and Stewart Halls.

Signs pointing students in the right direction to the ramp to enter Jesse Hall will not only be put on the outside of the building but the inside as well.

"There is only one entrance for students with physical disabilities and it's hard to find," Cheek said.

Handicap signs will be changed across all of MU's campus. Cheek said they will no longer show a stick figure just sitting in the chair, but will feature a figure that is in motion.

Cheek said the change is essential because it's important to show that students with physical disabilities aren't their disability.

A Digital Accessibility Initiative will be put in place as well.

Associate Director of Digital Communications Jason Rollins said the biggest change will be adding closed captioning to videos and in classroom settings to make it easier for students with learning disabilities to grasp the content.

"Ensuring access is as important to our digital campus as it is our physical campus," Rollins said.

MU student Naomi Collier said, "One key thing that they mentioned was this universal design for all students. It's cool to know that all these changes aren't just going to benefit one group of people."

The initiatives were announced as part of Ability Week, which aims to highlight diversity and contributions made by individuals with disabilities.