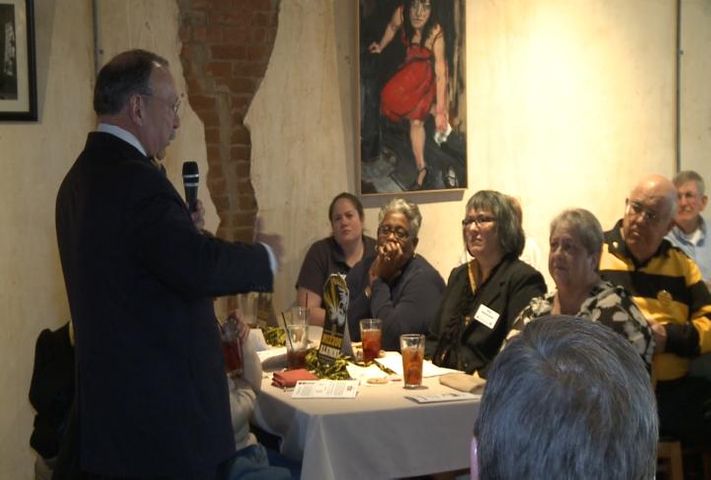 FULTON - MU Chancellor R. Bowen Loftin met with alumni and Fulton business and community leaders to discuss a new proposal to bring money into the university.

Loftin has been traveling around the state to gather input and information from community leaders about what he and the university are doing that works and what needs improvement.

"My goal is to go around the entire state of Missouri, hit it region by region, meet key people there from our alumni, meet key people from Extension, talk to leadership from the political spectrum as well," Loftin said. "And be sure I hear from them directly what Mizzou can do for them, and remind them what Mizzou does for them already."

Loftin said the university is actively trying to figure out a way to keep tuition costs low as state funding declines or flat lines. He said more philanthropic endeavors have been added in recent years to help with this, but it still hasn't generated enough money. He is now proposing a new initiative promoting student and professor business partnerships to share new ideas in order to bring more money back to MU.

"We think a way to do that is taking our creativity, something we do so well at Mizzou, and partner with the private sector to form new businesses owned partially by the inventors, the university and by our partners in the private sector" Loftin said. "And those businesses that succeed can become quite valuable. When they're sold or become public properties, that means a big transaction occurs bringing money back to the university to help pay the bills."

Loftin said one such business has already been sold for $40 million, and he hopes such initiatives can create new business in cities across the state.

"Fulton can be a place where we build great jobs coming from ideas built at the University of Missouri," he said.

Vice Provost and Director of MU extension Michael Ouart said Fulton and Callaway county have been focal points for years.

"Extension is organized by having county Extension Councils in every county who are the bridge between the local community and the campus to help inform us about what it is we need to do with regards to educational programs to educate the citizenry of the state," Ouart said. "It's very important and we certainly have it here in Callaway County."

Fulton Mayor Leroy Benton said he is thankful the chancellor is committed to the city and sees the economic and agricultural impacts MU programs have there.

"Fulton has considered ourself part of the Mizzou family," Benton said. "The Extension Council is a great resource for us. All of our businesses will utilize their expertise. And of course, in our agriculture industry, those folks are constantly seeking advice from the Extension Council."

"MU Extension has 1,200 people statewide. They're in every single county in Missouri. Everyone in this state is touched by them one way or the other fairly often," he said. "In fact, this past year, there were 2 million people served directly by Extension in the state of Missouri. Think about that. Two million out of six million people were served this past year alone. That touches your life as a farmer and rancher sure, but small businesses get benefits too. So do people who want to be well. We have health issues. We need to have good nutrition. We have arts programs. We have everything out there you can imagine now across this state providing at their location what people want to have."

Loftin called on those at the luncheon to help him plan for the 200th anniversary of the university.

"I'm looking forward now 25 years in the future when the university turn 200 years of age," Loftin said. "What will Mizzou be then? If we can define that and share a consensus view of it, that means our students, our faculty, our staff, our alumni all think the same way about our future, we can achieve it. We have the wherewithal to get where we want to go if we know where that is."