MU Coalition of Graduate Workers say of union: 'the fight is not over' 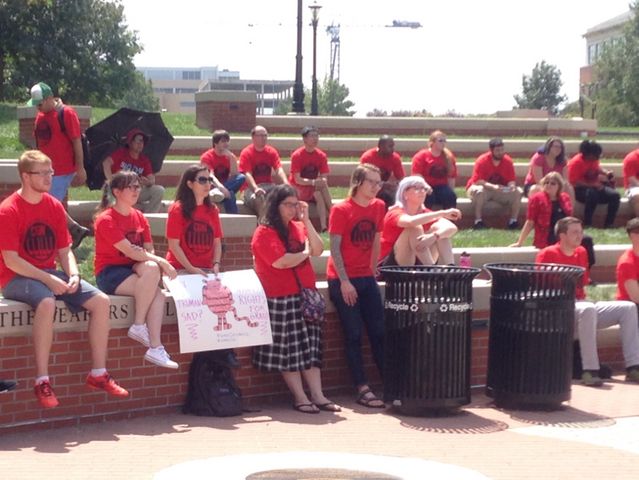 COLUMBIA – The MU Coalition of Graduate Workers rallied on Wednesday to create “a sea of red” on the quad and then marched over to Traditions Plaza.

Coalition member Pattie Quackenbush said, “The columns are here, they’ve always been here. This is a new, Traditions Plaza, it’s a new thing. Jesse sits right in the middle. The fact of the matter is we have to keep working with our old past, our new future and the current admins. So it’s almost a symbolism of that journey.”

Joseph Moore, another member of the coalition, said it was just a coincidence that a ruling from the National Labor Relations Board came down on Tuesday saying graduate workers at private universities are considered employees and have a right to unionize.

MU is a public university, therefore the ruling does not apply, but the decision generated some hope among the coalition.

“It certainly sets a precedent at the federal level that states and local courts can follow," Moore said. "I firmly believe it’s going to help us tremendously in our own legal case.”

MU said in a statement to KOMU 8 News that it still wouldn’t recognize graduate workers as employees, because it follows Missouri laws, which are different from those affected by the Labor Relations Board ruling.

That statement said, in part, “MU and graduate students still need guidance from Missouri courts about important, and as yet undecided, issues of unionization in our state.”

Here is what they Moore said the coalition wants from the university:

“We wanted to show administrators that we are here. We are not going away. The union is not going anywhere. You can try to drag it out in the courts all you want, but we are going to be here as long as it takes,” Moore said.