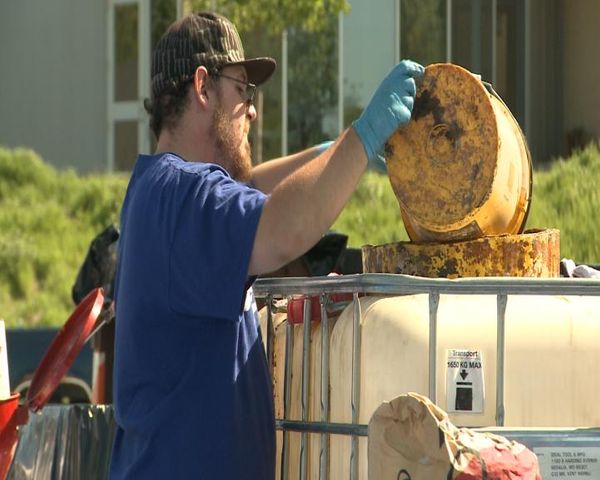 COLUMBIA - MU, the City of Columbia and Boone County teamed up for the first time Saturday morning to host a waste collection at the Reactor Field parking lot at MU.

"As we we're talking to the University, they actually called us since this is kind of the last day of classes and everything and they were saying 'Do you have a way that we can dump stuff, get rid of things," Mid-Missouri Solid Waste Management District Manager DeAnna Trass said. "So this is kind of how this huge thing came about, so we have the tires, e-waste and household hazardous waste."

Community members were able to drop off items such as tires, paint, televisions and computers at the collection all for free.

"We made it to where it can be free. Usually people have to pay for the televisions and computer screens and the like, and then they also have to pay for the tires," Trass said. "What ended up happening was the university offered to put in some money, the City of Columbia offered to put in some money because we usually fund this ourself, and that made it easier and so we decided to make it free for the public."

Trass said she expects Saturday's collection event to cost more than $25,000. She said making the event free to the public often allows for a good turn out. The collection site was so busy Saturday that workers ran out of space to store tires.

"Our landfills are being overrun, and it's an environment hazard," Trass said. "If we can eliminate that by having people properly dispose of things, having the tires grounded to playground mulch and tire rods and concrete...it makes people feel good that they are actually helping the environment maybe in their little, small way."

Trass said the community interest has grown with each collection event.

"This is kind of their way of saying 'Well, I'm helping my community, I'm cleaning it up in my little, small way and I'm getting rid of this stuff and knowing that it's not going to cause a hazard,'" Trass said. "So that's kind of why we felt like we needed to do this, and it's just grown. We've gotten interest from the community."