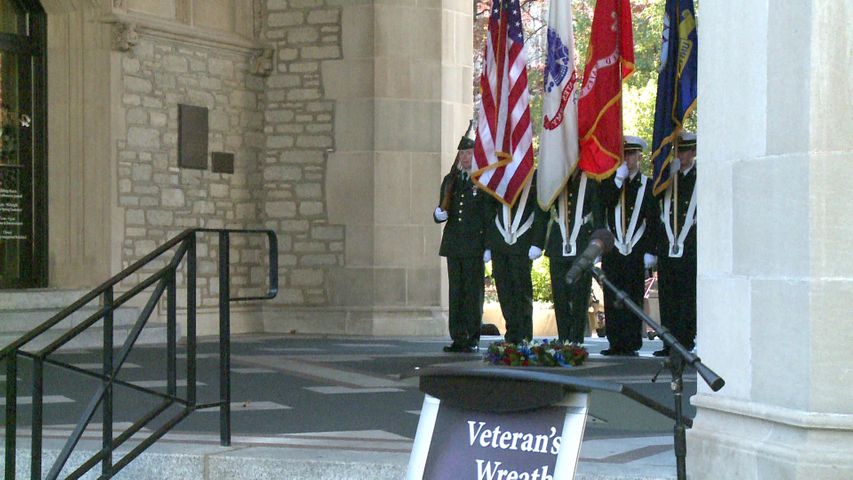 COLUMBIA - MU celebrated Veterans Day with three different events. The first, a re-dedication of the American War Mothers' Memorial, then a Veterans' Wreath Laying Ceremony, and finally the U.S. Postal Service's unveiling of a new stamp.

The commemoration started at the American War Mothers' Memorial Re-dedication. The memorial, a stone plaque, was originally located on Rollins Street, just east of the Math Science Mall. It was placed there on October 25, 1930. The stone, along with a row of seven trees, was removed to widen Rollins Street.  Clad in a white dress complete with white gloves, Nelda Bleckler,the outgoing National President of American War Mothers, spoke about how she lost her son. After a speech from Bleckler,Veterans, students, and attendees of all ages witnessed the stone's reveal just east of Memorial Union. The stone reads " the row of trees was dedicated October 25, 1930 by the State Chapter American War Mothers. In living memory of the World War hero dead of the University of Missouri."

Bleckler and the other attendees then made their way toward Memorial Union where a wreath laying took place. Organizers chose Memorial Union because in 1926, builders completed Memorial Union which honored 117 men who lost their lives in World War I.  Members of the active military laid the wreath under the tower to commemorate not only those veterans, but all veterans.

The commemoration concluded with the reveal of a new postage stamp. Bleckler sat in the front row as Pamela Davis, the Columbia Postmaster, and Alex Waigandt, a Purple Heart recipient, revealed the stamp. Bleckler's white-gloved hand clutched her cup of water as Waigandt spoke of the significance of the stamp and the veterans it's meant to honor. The stamp is called 'Purple Heart Forever' and is available nation-wide.