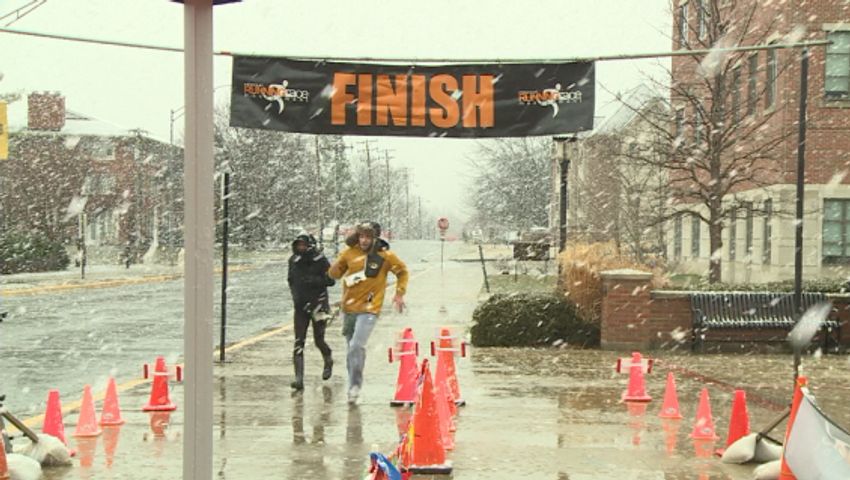 COLUMBIA - What goes great with a long run? Some say snow.

"It's not bad running weather," said Kacey Ellwein. "Once you warm up and your joints get used to it, it feels nice to have some cool snow falling on you."

Ellwein was just one of about 40 runners that participated in MU's School of Engineering's annual 5k/10k run on Sunday, as a part of the school's "Engineers' Week."

Jessica Stromsdorfer, one of the coordinators for the race, said while the event happens every year, the weather is less predictable.

"I think in other years it's just a gamble on the weather, but we like to do the event. It's outside and it get's people active," she said.

Participants had the option of running either a 5k or 10k, 3.1 and 6.2 miles respectively. St. Pat's Board, the engineering's club that planned the race, charged runners a $20 fee to participate. Proceeds will go to Habitat for Humanity.

"They make a difference in our local community for families in need of homes and a lot of the engineering organizations volunteer for 'Habitat' throughout the year as well and go help build houses," said runner Becky Gann. "It's kind of a fun way to raise some money for them."

In the end, both runners and coordinators alike said the weather will without a doubt make this a run to remember.

"I think this will be a great memory for everyone even though the weather was bad this year," said Stromsdorfer. "It still turned out really pretty, it looks like a snow globe."

Engineers' Week is one of MU's longest traditions, dating back 115 years. It will continue until March 17. Other events include a hot dog banquet, a 'giving' day and a casino night.