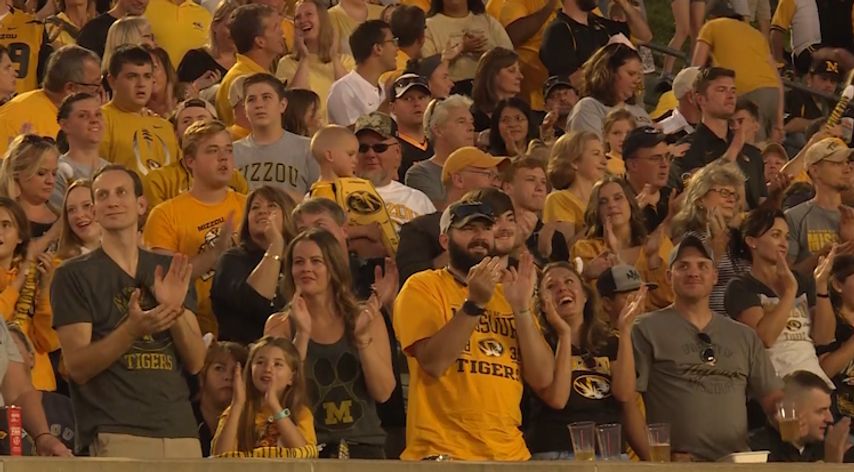 Fans enjoy a 50-0 romp of SEMO on Saturday the 14th at Faurot Field.

Something had to change.

"We evaluated a lot over the last couple of years. We talked to some other universities to see what they were doing...we needed to get butts back in seats," Executive Associate Athletic Director Jay Luksis said.

This bleak outlook is starting to brighten.

More than 56,000 fans attended the game against Southeast Missouri State on the 14th.

This marks a rise of five percent in attendance over the first two games.

Luksis said that they needed to focus on the fans at their front door.

"The energy and everything starts with our students. Our fans love when the students are going crazy. We needed them back," Luksis said.

In response, the athletic department slashed their Student All-Sport Pass from $265 to $150, if students purchased them before August 1st.

They also established strong relationships with student organizations, such as residential life, Greek life, and the Mizzou Alumni Association.

The results have been a significant jump. Student ticket sales are approaching a 50 percent increase from last year, and are still climbing.

Freshman Thomas Shultz bought the student combo package this season. He said any effort does not go unnoticed.

Other factors that shifted since last year are the completion of the south endzone project, the arrival of superstar Kelly Bryant, and the introduction of alcohol sales at games.

Luksis said that the announcement of alcohol sales did not impact ticket sales in any way. The south endzone project and Bryant were both announced before ticket sales started, meaning there is no way to analyze their true impact.

Shultz is a big fan who would have purchased tickets regardless, but he knows of less passionate fans who made their decision based upon price.

"If it was 100 dollars more, then you'd lose people who don't completely care. So the cheaper prices definitely capture a much bigger draw of students," Shultz said.

The added atmosphere impacts the players on the field.

"That means a lot to us. It really brings an environment to the stadium where it is tough on opposing teams whenever they come in here. It's fun to get behind," wide receiver Barrett Banister said.

The Tigers hope to carry this momentum into their clash with South Carolina on Saturday. Kick-off is at 3 pm.