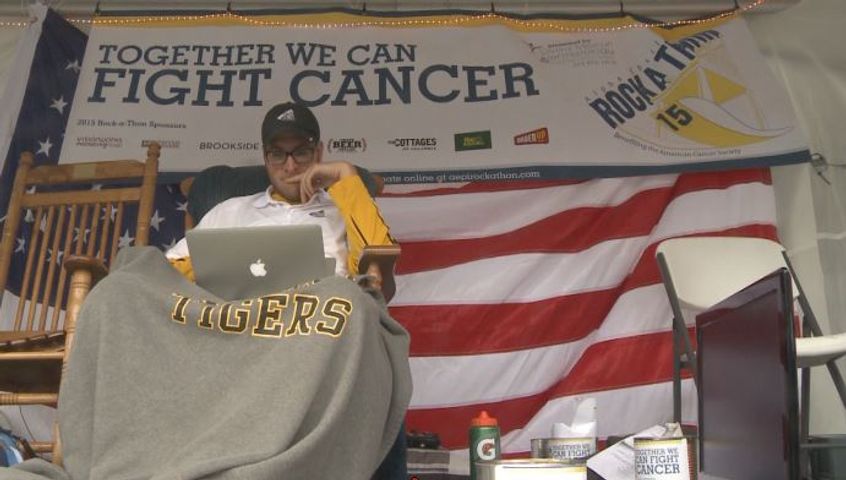 COLUMBIA - When many organizations are taking a stand to end cancer, one MU fraternity is taking a seat. One member will be rocking in that seat for 63 consecutive hours.

143 members of the Alpha Epsilon Pi fraternity are raising money for the American Cancer Society to fund skin cancer research as part of the chapter's biennial Rock-A-Thon. Jason Hoffman, a member of the fraternity, has been rocking in a chair at the corner of 9th Street and Broadway in downtown Columbia since Thursday morning and will continue to rock without getting up until Saturday night.

Hoffman said having to sit in a chair for 63 hours was a little uncomfortable, but the fraternity did come up with a way for him to get some sleep.

"I can sleep as long as someone else is rocking the chair," Hoffman said. "I got about six hours of sleep last night, which was nice, and I can kick my feet up and relax a little."

Even though members of the fraternity said they were waiting until after the Rock-A-Thon to announce how much money they collected, Hoffman said online donations have more than doubled compared to 2013. On top of that, local organizations like the Craft Beer Cellar have begun donating a percentage of its sales to the cause.

Danny Rozen, a member of the fraternity, said he's optimistic the fraternity will be able to break its donation record of $123,000.

"We have some big shoes to fill compared to 2013," Rozen said. "I think we're going to raise a lot of money, and it's going to be a massive amount that's going to help a lot of people."

Alpha Epsilon Pi is currently the largest single-chapter fraternity and sorority philanthropy in North America because of the 2013 Rock-A-Thon.