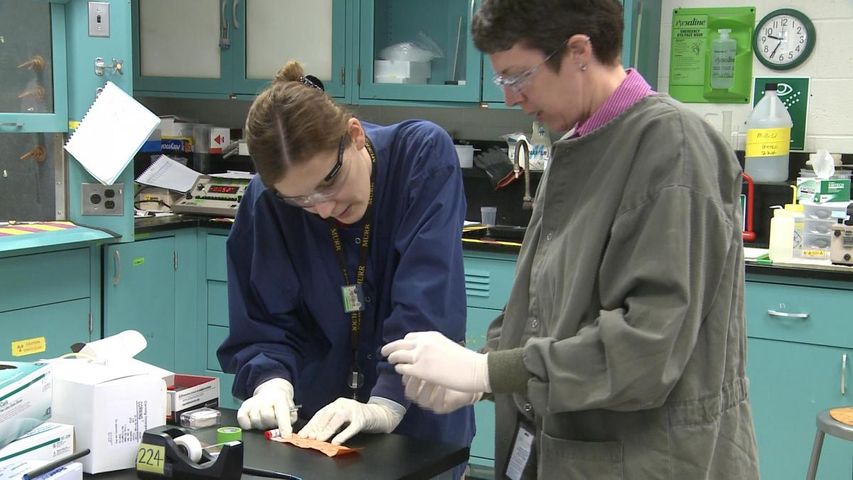 COLUMBIA - University of Missouri researchers said they are making crucial developments in cancer treatment and finding interactive ways to cope with tough issues like breast cancer and body image.

One team is using the MU Research Reactor to make radioactive materials that can be used to find or treat diseases, especially cancer.

One is for inoperable liver cancer, one is a treatment for bone cancer and another helps generate images of the brain.

"The things that we're developing now are in over 30 clinical trials in Europe," he said.

The vice chancellor of research said the university provides more radioisotopes for medicine and health care than any other reactor in the United States.

"We sell everything from isotopes to ice cream," Robert Duncan said. "Radio pharmaceuticals can literally be godsend for people that have inoperable tumors or other conditions."

But science is not the only research area. MU has notable projects in departments across the board, including theatre.

Burgyone has worked with educators and psychologists since 2003 to develop the MU Interactive Theatre Troupe, which focuses on difficult topics such as diversity, homophobia and body image. She said the program also helps breast cancer patients develop better relationships with their doctors.

"You get to understand more about the context and where people are coming from, where the characters are coming from," she said. "We invite audience members to say 'stop' and replace one of the actors to solve the problem."

Much of the funding for the Interactive Theatre Troupe comes from grant money shared with other departments.

"I've never seen a university more collaborative, where people in different areas will seek each other out based upon a societal need or an opportunity to understand something that we don't fundamentally understand yet," Duncan said. "And that's really exciting."

MU is especially strong in plant and animal sciences, he said. Because of this, Duncan said, the majority of research funding goes to that department.

The university has $238 million in externally funded projects and more than $200 million per year in "academic enterprise" or graduate and undergraduate educational projects. Many of the academic enterprise projects make products that can be sold to fund more research.

Last year, MU researchers received about $170 million from government agencies. These grants come from lengthy and competitive application processes. Some of the big sponsors include the U.S. Department of Agriculture and National Science Foundation.

The U.S. Department of Health and Human Services funds more research at MU than any other agency.

The MU Office of Research serves every department on campus and manages more than 3,100 active projects at a time.