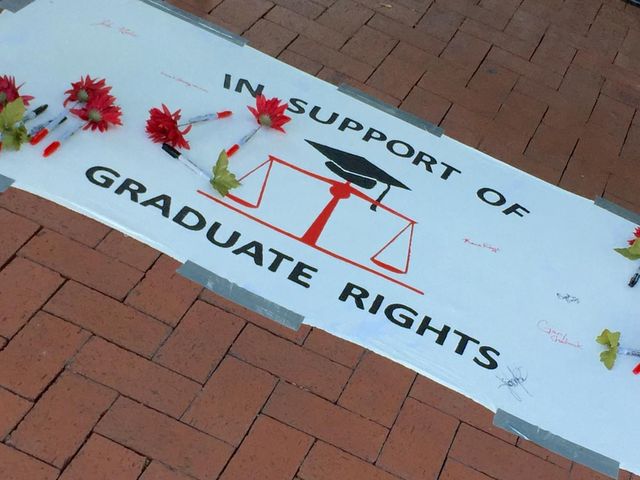 COLUMBIA - MU graduate students gathered on the quad and at the Memorial Union for a noon rally after walking out of class Wednesday. Many wore red to symbolize their protest.

The action committees for the protest met around campus at 8 a.m. They prepared for the day's protest, and discussed their goals for the outcome.

One committee member said the day is not about demands, but about recognition.

"Today is supposed to be a chance to highlight what grads do for the university of Missouri, and what they contribute," Secretary of the action committee, Sarah Senff said.

The Forum on Graduate Rights announced plans of the walk-out three days ago. Its issues with the university's policies still have yet to be fully resolved.

Although their desires, such as wages for graduate assistants that are above the poverty line and on-campus child care, don't directly affect everyone, they are still receiving heavy support from their peers.

"I think the school should understand where they're coming from. They're getting things taken away from them that they deserve," MU undergraduate student, Alexis Carter said.

Some other demands include affordable housing, tuition waivers and a guaranteed, fully subsidized health care plan.

"Being grad students, you pour thousands and thousands of dollars into going to Mizzou and they deserve those extra benefits," Carter said.

Senff urged the community to look at what the graduate students are actually saying on twitter via #GradsDo and #MIzzouUnited or at MUgradrights.org. Chancellor R. Bowen Loftin responded to some of the issues on Friday, Aug 21, but as of now, the walk-out is still set to take place today from 9 a.m until noon.

Committee members, along with other graduates, said they don't feel like requests are too outrageous, and they are only asking for basic necessities.

"When we can concentrate on teaching undergraduate students and doing effective research in our lab, we serve the university better than when we're focused on making poverty level ends meet," Senff said.

The action committee said they are fighting for their rights as well as undergraduates'.

Some professors and departments cancelled classes due to the protest, but not all. The Journalism School's associate dean for undergraduate studies sent out the following email:

Some students who did not plan to participate said they support the cause.

"I think it's a good thing. They need to take a stand. It's really ridiculous that they're even having to go through that," Lacey Tucker said.