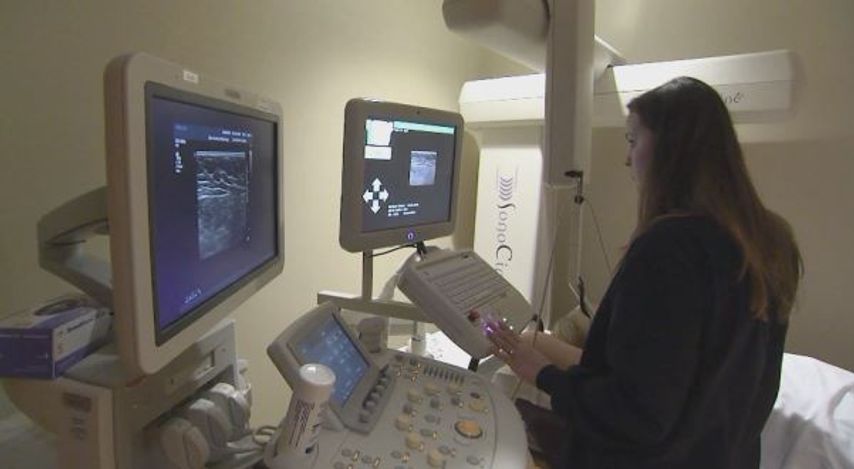 “This does not replace the mammogram,” Garg said. “This is in addition to the mammogram. The mammogram is going to be quicker because it takes full pictures, and this one is taking the pictures from one side of the breast to the other.”

“About 40 to 50 percent of women have a form of dense breast tissue,” Garg said. “Women have more fiber of fibrous and glandular tissue as compared to fatty tissue. So fibrous glandular tissue looks white on a mammogram, cancer looks white on mammogram, so the lack of contrast between those two white versus white makes it a little more difficult to pick them on the mammogram.”

To determine if this new technology is a good choice, a radiologist will determine breast density based on a patient's mammogram. There are four categories of breast density, and patients are assigned to one based on their results. Depending on risk factors such as family history, a physician may recommend additional screening beyond a mammogram.

A cancer prevention specialist with the American Cancer Society said the screening process is important for early detection and prevention.

“The automated whole-breast ultrasound is a good way to detect additional cancers that can’t be found on an MRI (Magnetic Resonance Imaging) or traditional mammogram early on,” he said.

According to a news release from MU Health Care, "During an automated whole-breast ultrasound, a woman lies on her back as the ultrasound device moves in parallel rows to ensure no areas of the breast are missed. The exam captures between 3,000 to 5,000 images that are then interpreted by a specially trained radiologist at Ellis Fischel Cancer Center. The exam is painless and takes about 25 minutes."

Ellis Fischel Cancer Center is the only hospital in mid-Missouri to offer automated whole-breast ultrasound.