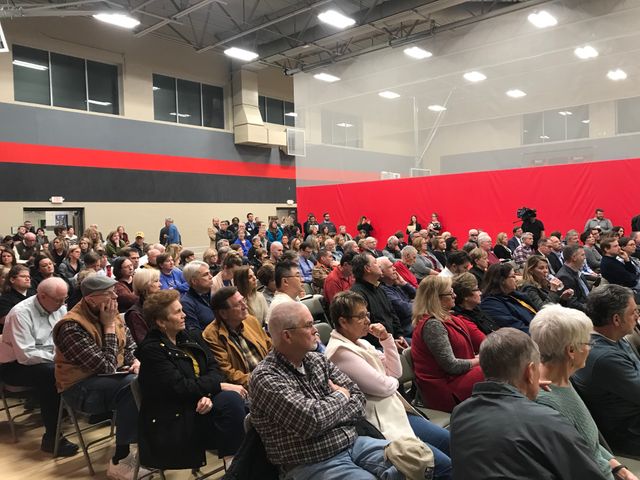 File photo from forum in Jefferson City on Monday, Dec. 10

The forums come as the group Coalition for Choice has raised concerns about how the sale would impact patients' health care services in Jefferson City.

"A Coalition for Choice was created to oppose healthcare monopolies and to advocate for consumer choice in Missouri healthcare," a news release from the group said.

In August, the Catholic, not-for-profit health system said it was in "exclusive discussions" with MU Health Care to transfer ownership of its ministries in mid-Missouri, which include its hospitals in Jefferson City and Mexico.

Hallie Gibbs II, a board member for the coalition, said the turnout at the Jefferson City forum demonstrates that community members want "choice and they want alternatives in their health care."

"They're very passioned at the last forum that they do not want to see a University of Missouri monopoly in health care here," said Gibbs, who also serves as the coalition's general counsel.

Jonathan Curtright, the MU Health Care CEO, said it was "fantastic that we got so much feedback from the community" at last week's forum.

"I love and cherish that zeal and that passion, and we will get better because of that zeal and passion moving forward," Curtright said.

“We are thrilled to have so much community interest in this, and we want feedback," Chew said. "We encourage feedback and are happy to hear from those who are interested and engaged in this process.”

Chew said a definitive agreement would be finalized by early next year and the closing would be contingent upon conditions, including regulatory approvals.

The community will be able to ask questions to leadership from MU Health Care and SSM Health, according to a news release.

The forum will be held at the Missouri Special Olympics Training for Life Campus in Jefferson City. It is expected to start at 5:30 p.m. and end at 7 p.m.