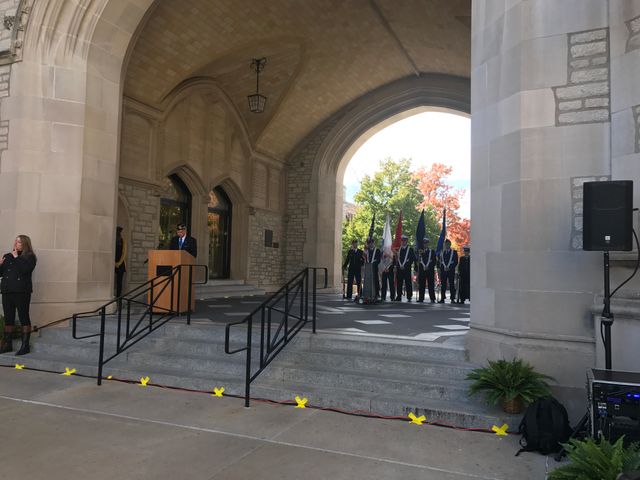 MU participated in the National Remembrance Day Roll Call where veterans read of the names of MU student veterans who have been killed. The event is an annual event at MU to honor veterans.

The keynote speaker of the event was Col. Roderik Cox who served over 12 years in combat, peacekeeping and covert missions. Cox, an MU alumnus, said that despite varying definitions of veterans throughout different branches of the military, his definition is clear.

"I prefer to define a veteran as anyone who at one point in time in their life, held up their hand and swore an oath to support and defend our Construction," Cox said.  "Who wrote that invisible blank check that could be cashed at anytime of our nation. That check for everything they had, up to and including their life."

"We certainly as veterans look to a day when we will have world peace so that you know perhaps this Veteran's Day or next year's Veteran's Day or ten years from now, it would be the last time we have to stand in the cold and read the names of those service members who made the ultimate sacrifice," said Ross.

Throughout the event many of the speakers referred to the stereotypes of veterans that have come out of Hollywood.

"Most veterans I know shake their head at the Hollywood stereotype, and sure there are a few of us out there that fit that image, but there are a whole heck of a lot of us who are just regular folks," Cox said. "We aren't living on the street, we don't need any handouts. Rather we were lawyers, teachers, nurses, bankers, coaches."

Event attendee David Emily, who served 5 years in the Navy before becoming a student at MU, echoed similar sentiments.

"I think it is kind of important to remember that veterans are just average people. I think Hollywood kind of portrays veteran in a certain light and that's not always true. Veterans are normally just typical, they want to go to school, they want to be a student they want to have a job," Emily said.

Ross also expressed gratitude for the event saying it gave veterans and student veterans a chance to realize the gratitude the country has to them.

"It shows that this country appreciates what veterans do for them. Veterans when you see them in the community, you may not know they are veterans, your neighbor could be a veteran, your best friend's father or mother could be a veteran," Ross said. "You never know because veterans don't walk around saying 'Hey, look at me, I'm a veteran," and so there is no way of knowing walking through campus."

The event was followed with a reception at Bengal's Lair in Memorial Union.