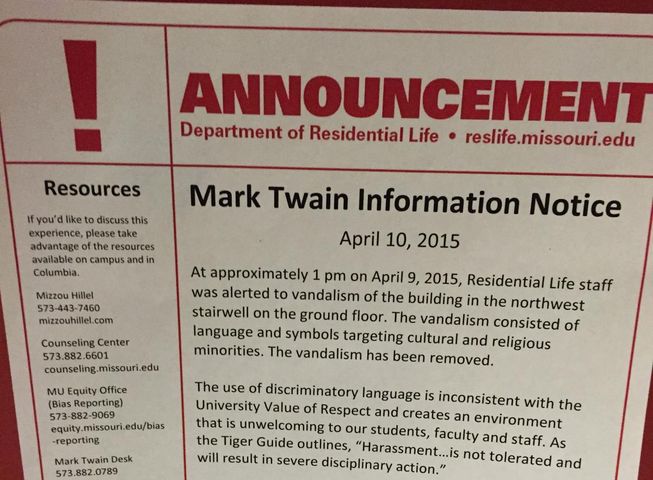 On Thursday, April 9 and Friday, April 10, graffiti containing swastikas and threatening language was found on the ground floor of a stairwell.

A student group, Students Supporting Israel, said in a press release the first incident included a swastika, the Illuminati symbol and the word "heil," all drawn in ash. A day after MU department of residential life student staff members removed the graffiti, a second incident was reported and included a swastika and the words," You've been warned." Student staff members painted over the graffiti shortly after and notified the MU police department.

Jared Kaufman, a resident in Mark Twain residence hall and president of Students Supporting Israel (SSI) said he was very hurt by the vandalism.

"I felt threatened," Kaufman said. "The biggest thing that I need to see happen is the University releasing a statement condemning the incident. As of now the university has said nothing about it. The chancellor has said nothing, the department of residential life has said nothing."

Kaufman said the chancellor's office should send an email condemning the incident and clearly stating that swastika is not acceptable.

"Even though we don't know the motive and why somebody did it it was perceived negatively, obviously, and I think by not releasing a statement, the chancellor is missing a huge educational opportunity to show the students of the University of Missouri how to create a safe environment for all students."

MU spokesperson Christian Basi said if the individuals responsible for vandalism are caught, they will be held accountable.

"If they are students they will go through the office of student conduct," Basi said. "And they can reach anything from verbal reprimand all the way up to expulsion. The individuals could also face criminal charges."

Basi said student affairs staff met with residents in Mark Twain to assure them there was an investigation taking place and to share what students could do to help protect themselves.

MUPD is not releasing photos of the graffiti pending its investigation.