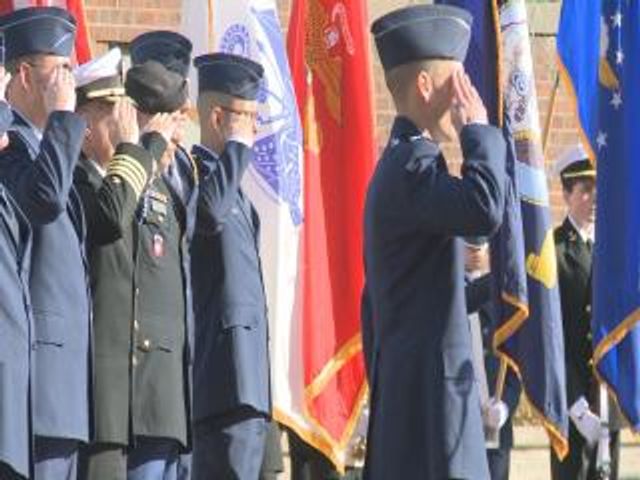 The celebration began on Nov. 9 with the beginning of a 24-hour Vigil of Honor.

"There is a memorial right in front of the Boone County Courthouse, and we have cadets from the army and air force and midshipmen from the navy who guard it in shifts of two," Stark said. "They guard it for 24-hours straight. To me that is super important because it represents service in the military is all about in the first place. The point is that they are on watch non-stop for 24-hours."

MU has a 28-year history of hosting the Veterans Day Parade and Vigil, but Stark said they could not have done it without the help and support of everyone involved.

Here are the groups that contributed to the parade and vigil:

Stark said he has been planning the parade since September. He said it was stressful at times, but it was exciting to realize that was going to be his responsibility.

The parade began at the Francis Quadrangle and went up Eighth Street to the Boone County Courthouse. After the parade there was a closing ceremony to honor the veterans.

The guest speaker was Colonel William Boston. Boston served in the US Air Force for more than twenty seven years. During that time he accrued almost 2,000 hours as a fighter pilot and executed over 260 combat missions.

Stark said this is a unique event for the community.

"There is no other parade, other than the Salute to Veterans on Memorial Day event, but there is nothing else quite like this in Columbia," Stark said.

This was the first year ROTC held the ceremony on the amphitheater. Previously, Stark said it was held in front of the pillars by the courthouse.

Stark said he was really happy with the turnout of the event.