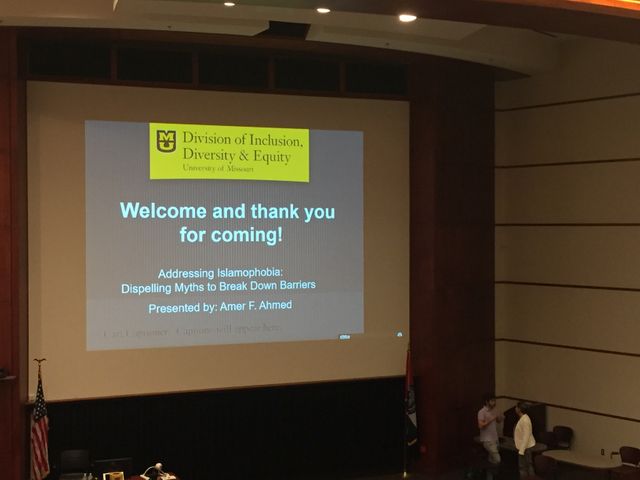 COLUMBIA - MU's Division of Inclusion, Diversity and Equity hosted a guest speaker who addressed Islamophobia and debunked some misconceptions about both the culture and faith Tuesday night.

Dr. Amer F. Ahmed was the keynote speaker. He is a faculty member at the Insitute for Democratic Education and served as the Director of Intercultural Teaching and Faculty Development at the University of Massachusetts Amherst.

Ahmed was born in Ohio to Indian Muslim immigrants and said he wants to help break down barriers between cultures in the U.S. He said even where he grew up "he was treated as a foreigner."

Ahmed began the lecture by talking about the history, basic principles of the faith and differences in the culture. He addressed common misconceptions about womens' rights, violent terrorism, anti-semitism and more.

"Through educating people it can raise awareness for the fact that Muslims are just regular people. There are some differences in beliefs, but other than that we are all just human," said Ammer Ahmad, the president of MU's Muslim Student Organization.

"Not all Arabs are Muslims. The largest population of Muslims is in Indonesia," Ahmed said.

He said in a post-9/11 world, Muslims are often unfairly targeted. He discussed the issues of racial profiling, discrimination and talked about hate crimes in the U.S.

"Every man in my family has been on a flight watch list at some point," he said.

Ahmed said many times Muslims are perceived as outsiders.

"We are faced with a lot of perception and narrative that being Muslim is at odds with being American. In so many ways we feel we are being portrayed like a contradiction, and that you can't be both at the same time," Ahmed said.

October is Islam Awareness Month. In light of this, MU's Muslim Student Organization also spoke before the lecture began. The president said they plan to host a number of events this month to promote awareness and discussion.

Vice Chancellor of the Division for Inclusion, Diversity and Equity, Noor Azizan-Gardner, said the division hosts these events to facilitate conversation among students to help "bridge cultural understanding."

"We need to work together to strategize a way to start the semester by breaking down barriers and create a welcoming environment," Azizan-Gardner said.