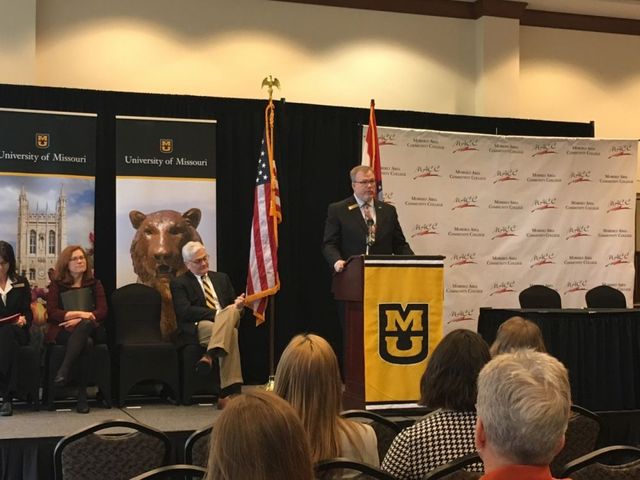 COLUMBIA - The freshman class entering the University of Missouri in fall 2017 is expected to be the smallest in nearly two decades. With freshman enrollment down, MU is seeking new ways to boost student numbers, including attracting more transfer students from area community colleges.

On Monday, officials from MU and Moberly Area Community College announced an initiative that will ease students' transitions between the two schools. The schools' new partnership could reduce the time and money students spend on pursuing a bachelor's degree by ensuring course transferability between MACC and MU.

The program also aims to enhance academic advising partnerships between the two schools.

"We want this partnership to help our students transfer so that they're not finding themselves with unused or excess credits," said Paula Glover, MACC's chief academic officer. "We don't want them finding themselves in situations where they're having to take an extra semester to get that bachelor's degree completed."

The partnership, known as MIZZOUMACC, will admit as many as 30 MACC students into MU during its 2017-18 pilot program.

The agreement between MU and MACC will allow students in the MIZZOUMACC program to live in MU campus housing facilities, obtain MU dining plans and access other campus resources, including the Student Health Center, recreation center and athletic events.

"It allows our MACC students to be able to take full advantage of the combined resources available on both of our campuses," said Garnett Stokes, MU provost and executive vice chancellor for academic affairs. "They have the academic support services, the career advising, the student organizations. They're able to really get the best of both worlds."

Administrators said the opportunity for students seeking MACC associate's degrees to live on the MU campus could smooth students' eventual transitions to MU and ease the "transfer shock" associated with moving from a small community college to MU's larger campus.

Interim MU Chancellor Hank Foley said the MIZZOUMACC program allows eligible students to utilize Missouri's A+ Scholarship Program, then transition into a four-year degree at MU, while enjoying resources from both the MACC and MU campuses.

In fall 2016, MU enrolled over 320 transfer students from two-year colleges. Almost one-third of those students transferred from MACC campuses.

MACC President Jeffery Lashley said between 65 and 70 percent of MACC's approximately 5,000 students intend to transfer to a four-year institution after completing an associate's degree at MACC.