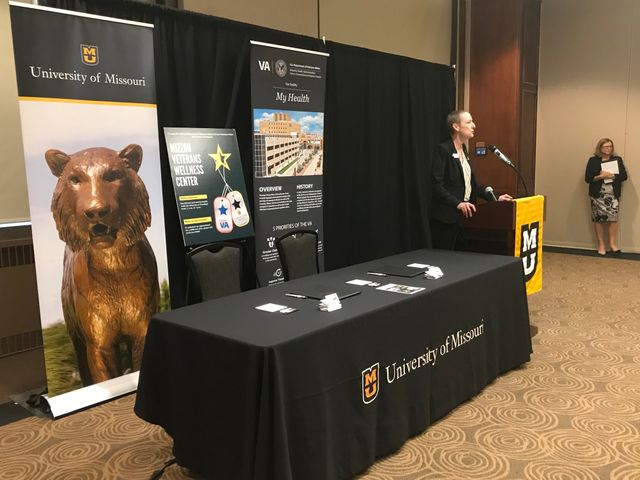 COLUMBIA - The University of Missouri and the Harry S. Truman Memorial Veterans’ Hospital announced and signed a partnership to help more than 285 students at the university who served in the armed forces.

The collaboration between the two, the Mizzou Veterans Wellness Center, will offer counseling services, mental health resources and community programs to student veterans, veteran faculty and staff, as well as their families.

“Today, we’re able to really celebrate a big step forward. We are doubling down on our commitment to success,” said MU Chancellor Alexander Cartwright.

“We’re committed to providing those students with the essential services that facilitate the type of excellence they deserve.”

Owens, a 28-year-old senior at MU and former member of the United States Air Force, has been a vocal proponent for the center.

“When I left the military, I had to make a decision between my mental health and my classes,” said Owens.

The meteorology major transferred from a small school in Arkansas and found help through Veterans' Affairs, learned how hard it was to not have resources readily available.

“Having to make that decision, it lead me to isolation and lead to me making poor decisions on my part. Where as opposed to here, I was able to go from 1 a.m. in triage, to 9 a.m. being in therapy,” said Owens.

Psychologists like Randall Rodgers will be there to treat veterans. Acting as the recovery coordinator for Veterans’ Affairs, Rodgers' role is simple.

“We want to make it easy for veterans, in this case student veterans, to have access to any behavior health care they need. If we make it easier for them to do that, they will be more likely to do that.”

The center will open in the MU Law School in early September.