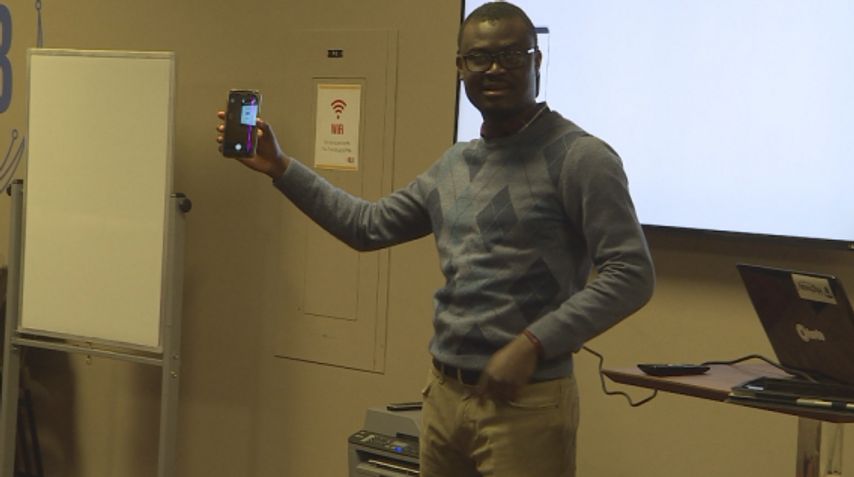 COLUMBIA - A doctoral candidate at MU is hoping his new app will help people around the globe who are visually impaired.

Oluwatosin Oluwadare app, EyeCYou, has been in development for the past two years and aims to help people that are visually impaired to picture exactly who they are meeting.

"It gives them a description of whoever they meet, tells them the shirt color, physical appearance, gives the age estimate, gender estimate, even their race, just to give the visually impaired a head start of who they are meeting," Oluwadare said.

He said that can help make people more independent because they have so much more information about who they are encountering.

With the app, the user can hold the phone up for a picture and then a voice, through headphones, could identify physical traits of the person.

"EyeCYou can give the visually impaired a sense of security just in knowing who they are meeting when they meet new people," Oluwadare said.

He said EyeCYou started as a fun project that originally just gave the shirt color of a person standing in front of the user. But, he then realized how it could help people with visual impairments worldwide.

The app went into the Google Play store for Google and Android devices just 20 days ago.

“It’s a major milestone and major achievement for me because it’s something that has moved through multiple different phases and it’s just really incredible that we’re finally a mobile app in a major store for people to use," Oluwadare said.

He presented his app at the Hub at Columbia Regional Economic Development Inc. Tuesday night. He's been a client of REDI since going through one of its tech series bootcamps for entrepreneurs.

"There’s a need in the U.S. because people can lose vision due to diabetes, glaucoma, things like that. But, around the world, the need is even bigger where there’s less of a healthcare infrastructure," Bunch said.

He noted the large number of people who have Android smartphones.

"It’s really a great tool to help people that have no vision to navigate their life and meet people and feel safe when they’re meeting new people," he said.

Oluwadare hopes to continue development of the app, get into the Apple Store, work to start partnerships with schools for the blind and raise money from investors.