MU police officer fired over photo showing him in blackface 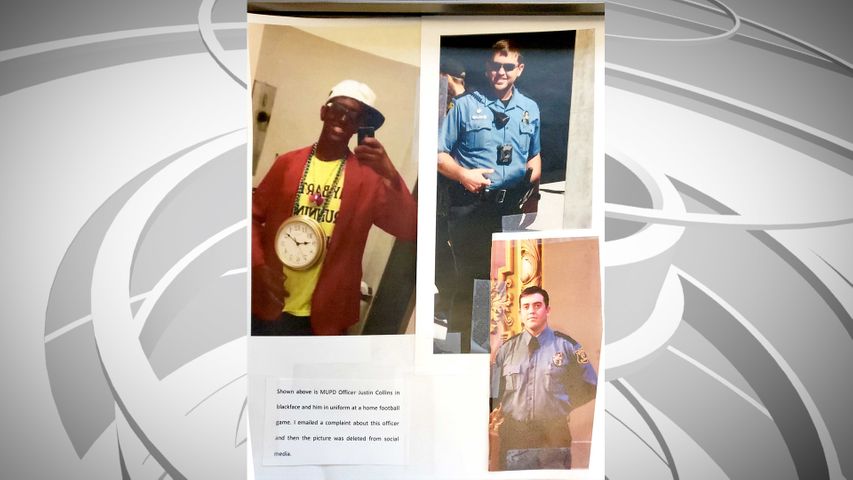 A KOMU 8 viewer said the picture was deleted from social media after he reported it to MUPD.

COLUMBIA - The MU Police Department announced Tuesday it had fired an officer after a photo of him in blackface surfaced.

According to a news release, Marcus Collins admitted the photo was him and the incident happened before he was an employee with MUPD.

Blackface is a form of makeup used by non-black people, most often for costumes or, historically, for theatrical performances. It has come to be widely seen as racially insensitive and offensive.

“This type of behavior is not tolerated at Mizzou, and we understand how this impacts our entire community profoundly,” said MU chancellor Alexander N. Cartwright. “Racism, hate and insensitive behavior have no place on our campus. We are committed to our values of respect, responsibility, discovery and excellence, and to making our campus a place where everyone feels welcome and protected.”

Traci Wilson-Kleekamp, the president of Race Matters, Friends, said she does not think this picture "is a surprise about police culture."

"There's no shock and awe for me, but I am glad that the university acted quickly," she said. "We'll see what happens next."

Students on campus had similar reactions when shown the photo. Allison Chippendale is a senior at MU and remembers when the university had racial incidents in 2015. She said she couldn't believe the photo.

“Coming from anybody that’s ridiculous and outrageous but especially from an authority figure who’s supposed to make everyone on the campus feel safe. That’s obviously not okay,” Chippendale said.

Jordan Pryor is a junior at MU. He said he didn't realize people still do this.

“It’s wild that people sit back in their mind and say like ‘yeah I’m going to still do this anyway’ because I feel like once you do that you know the consequences that are going to come with that," Pryor said.

Other students said they don't understand why MUPD didn't catch this sooner. Dominic Burtis is one of those students.

“It seems like they should have seen that earlier or they probably didn’t see it as a big deal," Burtis said.

Sol Ampah-Darko is a graduate student and he echoed what some others brought up: why wasn't there a more thorough investigation before Collins was fired.

"I think that is not fair," Ampah-Darko said.

Although, he said there must be some sort of punishment.

"Him being a police officer of the racial denomination that he belongs to, I’m sure he knew the implications the impact," Ampah-Darko said. "For that matter, I think he has paid a result for what he has done.”