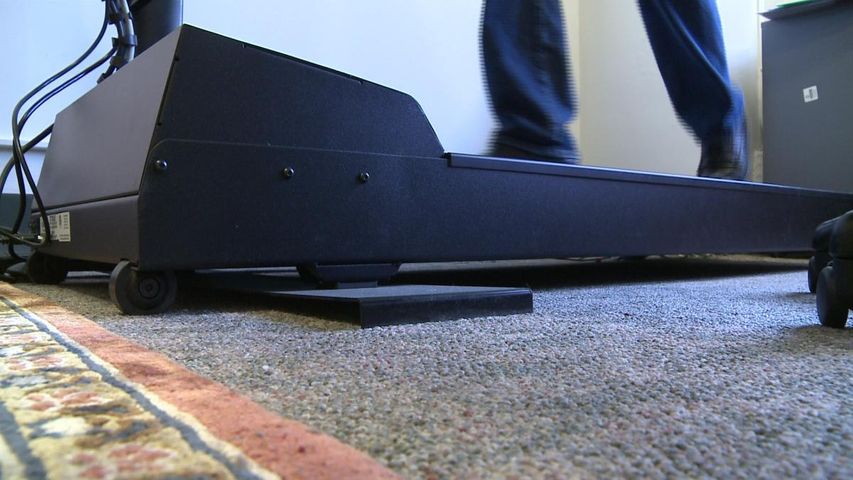 COLUMBIA - MU professor Chris Hardin said he "walks the talk" as he used his treadmill desk Wednesday. He is the chair of the Department of Nutrition and Exercise Physiology, and he eventually plans to give all faculty and administrative staff the option of having their own.

"The desks are a perfect example of workplace wellness," Hardin said. He also said he has experienced less lower-back pain since he got the desk about six months ago.

Despite this, another MU nutrition and exercise physiology professor said she would not want a treadmill desk in her office. "We still have many people who are overweight in professions that keep them on their feet for eight hours a day... such as nurses and waitresses," Jill Kanaley said. "I don't buy into it."

KOMU 8 also spoke with guests of Wilson's Fitness on Rangeline Street in Columbia to get their opinions on the technology. "I've seen people in my family work behind a desk and gain weight. So, I think that'd be a good activity while at work," Columbia resident Mario Flores said.

A company called Steel Case distributes desks like the one Hardin uses at a cost of around $3,700. The department hopes to have new desks when it moves into a renovated building on the MU campus in fall, 2013. Hardin said the department is taking donations to fund multiple treadmill desks for staff members. He also said departmental funds will be used in addition to donations to pay for the new desks. If you or your organization is interested in donating, email HardinC@missouri.edu.