MU Raptor Rehab releases eagle back into the wild 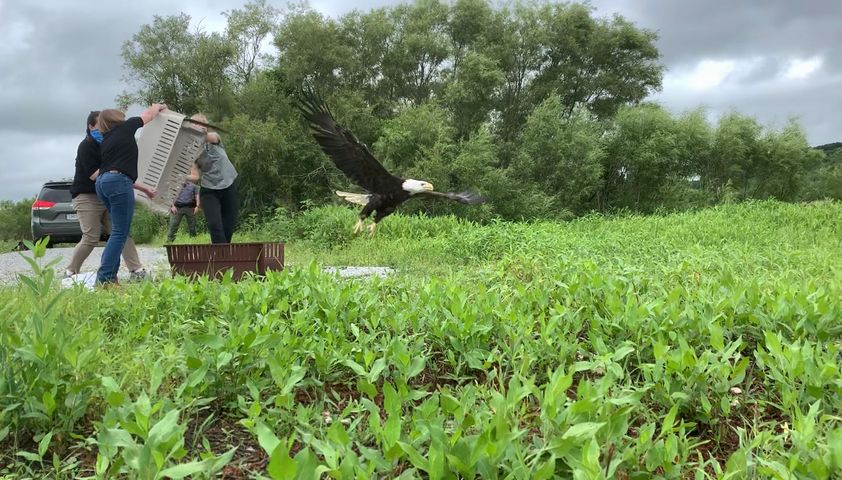 An American bald eagle flies out of its cage on Saturday at Eagle Bluffs conservation area.

COLUMBIA - An eagle is soaring to new heights thanks to the MU Raptor Rehabilitation Project.

On Saturday, the project released an American bald eagle back into the wild with the help of the Missouri Department of Conservation.

The eagle, named Dorothy Parker, arrived at the project after being struck by a shotgun in November of 2019. Dr. Whitney Collins, an alumna of the MU College of Veterinary Medicine, led the effort on the surgery and the rehabilitation of the eagle.

Collins said when she saw the gunshot wound, there were immediate questions concerning the eagle’s future.

“There were days I was concerned that there was a chance that I may not be able to release her,” Collins said. “And I had to tailor her care to keep everybody safe, including herself. Because of that, we were able to do surgery, and it was a very successful surgery. But we did have to modify it so that way, we knew she had the best chance possible of release.”

From start to finish, Dorothy’s rehabilitation took nearly 7 months. Collins said she feels relieved Dorothy is able to return to a wild environment.

“Knowing that an animal that was shot for reasons unknown -- that would have died otherwise in the wild -- is actually living again, in the wild, is fantastic,” Collins said.

“As a veterinarian, I'm honored to give quality of life to all species, whether domestic or wild. Today's release just makes my heart very happy knowing that the hard work was absolutely worth it.”

She said the best way to support the ecosystem is by volunteering and contributing money to local organizations that aid animals.