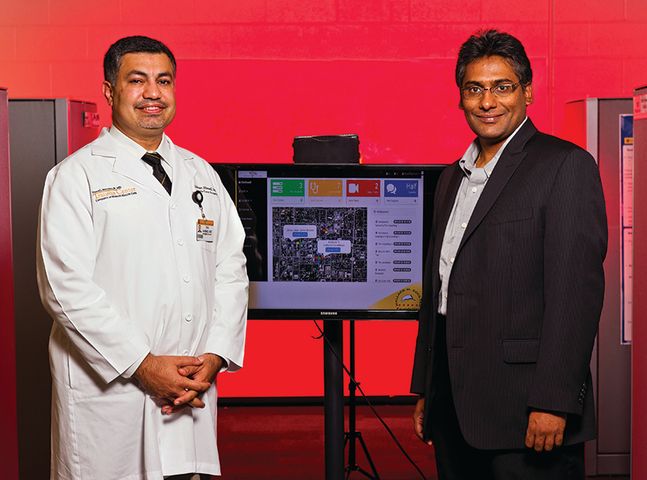 COLUMBIA – MU researchers are presenting a new disaster management system at the 2016 Consumer Electronics Show in Vegas Wednesday through Saturday.

Prasad Calyam, assistant professor in the MU Department of Computer Science, and MU graduate and undergraduate students are presenting the disaster-relief technology at the trade show.

Sal Ahmad, M.D., University Hospital trauma surgeon and clinical project lead, Calyam and MU graduate and undergraduate students created the application, which is called Panacea’s Cloud. It is a hands-free, wireless and portable system made with Google Glass and Recon Jet smart eyewear.

Ahmad said Panacea's Cloud is an application that is put into the smart glasses.

"We have designed a system that will put heads up display glasses on the paramedics that allows them to communicate with us with an audio feed, so whatever they see and hear we can hear back at the dispatch center," Ahmad said.

Ahmad said this technology gives first responders the best tactical information and advice, and the device communicates either back to the hospital or the Boone County Dispatch Center.

"Now we as the coordinators can assist the paramedics and decide who needs to transported and who we can save and who unfortunately we can't," Ahmad said.

Ahmad said the most important part of the system is that the device has a way of setting up a wireless network at the scene and then connecting it back remotely to existing infrastructure.

Ahmad said the glasses can double as safety glasses as well, so the first responders can focus on the scene with their hands free.

"The program allows first responders to activate this video stream and communicate back us," Ahmad said.

Calyam and Ahmad were one of five research teams to receive MU Coulter Awards at the 2015 ceremony in September.

The press release said the Consumer Electronics Show is an annual trade show organized by the Consumer Technology Association that features products from more than 3,600 companies worldwide.