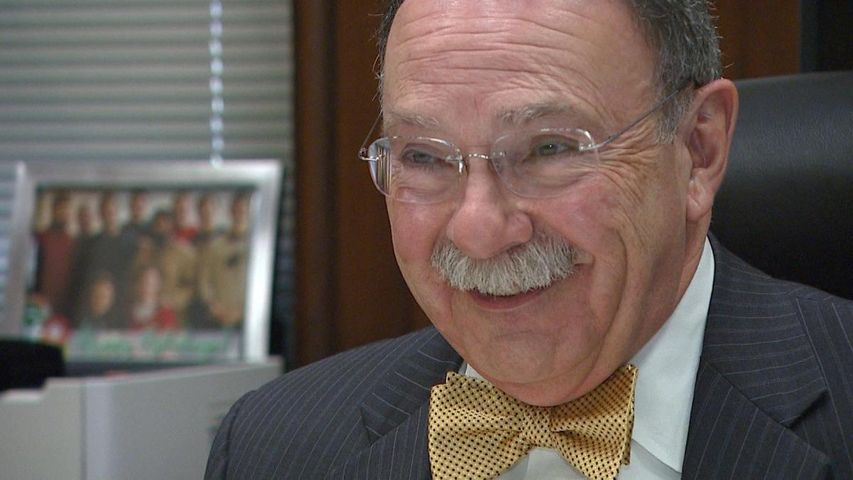 COLUMBIA - The University of Missouri's new chancellor traded in his Aggie bow ties for black and gold ones when he started in February. R. Bowen Loftin comes to MU after serving as the president of Texas A&M. In his first month as Mizzou's chancellor, there's one thing Loftin's made clear; he's here for the students.

"The best part is all around you here, these students are the best part of campus," Loftin said. "Long days at my age are not easy, but when you have a chance everyday to talk to 19, 20, 21 year old students here who are just so full of life, it gives you the ability to go forward and keep working hard too."

64-year-old Loftin's pretty tech savvy and uses social media to reach students, too. He's got more than 11,000 followers on Twitter. He changed his Twitter handle from @AggiePrez to @bowtieger when he made the move to MU. He said he gets 50 to 60 tweet a day.

"Social media gives them direct access to the chancellor, why not? I'm here to serve them," Loftin said.

Loftin's led the university for more than a month now and it hasn't been an easy one.

"Day by day dealing with the problems that have come along," Loftin said.

Since Loftin took over the helm, the story about Sasha Menu Corey, Michael Sam's public announcement and the tragic death of Lt. Bruce Britt at University Village Apartments.

"Obviously losing a community leader, a firefighter was a really, really hard thing for not just his family, but also all the firefighters here in Columbia and the entire community and we're really sympathetic to all the things that went into that," Loftin said.

He has recognized quickly Mizzou is really the city's pride, one affects the other.

"We owe it to each other to do a couple of things, communicate. We must tell each other what's going on," Loftin said. "It's very easy to sit here behind these doors, make a decision that could affect the city and not communicate it to the city, that's wrong."

Addressing those issues is just one part of Loftin's job. He's travelled to Atlanta to help plan the football schedule, hired a chief financial officer because Mizzou didn't have one and met a lot of people.

"Relationship building is sort of the key to being successful in a leadership role like this. So, I've been busy trying to meet new people in campus, outside of campus, the community. I have to get acquainted," he said.

On top of creating a CFO position and hiring someone for it, Loftin said more structural changes could be on their way.

"I've got to be able to have a team that I can delegate to that understands me," he said. "I don't change for change sake, I change when things are going to be improved by that."

Just like his change from maroon and white to black and gold, that's an improvement.

"My collection of black and gold is collecting rapidly," Loftin said.

Loftin said he has around 400 bow ties and counting. He said he started wearing bow ties as a form of rebellion when he was required to start wearing a tie to work earlier on in his career. He also said after 37 years of bow tying, he can tie one in about 10 seconds.

Loftin said Mizzou's future is bright thanks to a strong, bright student body.

"So, Mizzou becomes not simply an institution trying to be like others, but becomes the one others want to be like," he said. "Fundamentally, we exist for one reason; educate our students."