MU Says it Could Not Prevent University Village Collapse 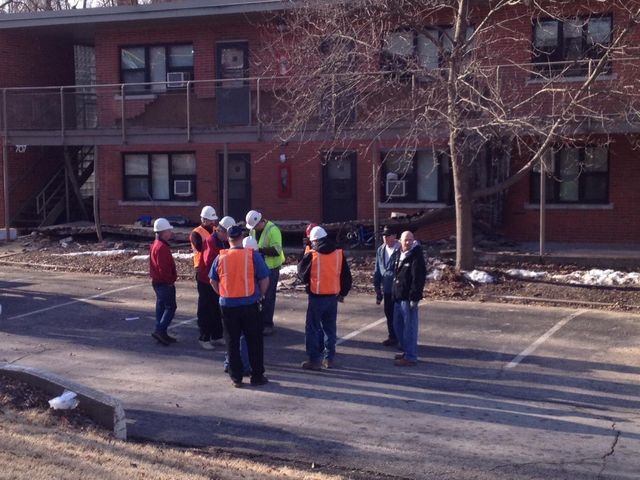 COLUMBIA - The University of Missouri says it could not have predicted the walkway collapse at University Village Apartments two weeks ago.

The university owns and operates the apartment complex and released more than 1,000 pages of documents detailing what it knew about the conditions of the apartment before the walkway collapsed and killed firefighter Lt. Bruce Britt in February.

MU would not allow KOMU 8 News to talk to the Residential Life staff, and the engineering firm it hired told the station to refer all of questions to MU's Spokesman, Christain Basi.

The documents released by MU show structural concerns dating back many years.

Emails from 2010 show the ongoing concerns about roofs and decks at the complex "over the last 5 to 10 years."

Other emails show interest in a project to improve the decks at University Village for "structural" and "cosmetic" purposes in May 2010 by adding soffit to the decks.

A May 2010 email from a Residential Life supervisor expresses interest in looking at University Village's decks, possibly that summer.

Students continued to live in the buildings while the project was completed a full two years later in October 2012.

That wasn't the only time MU allowed students to live in buildings it felt had saftey or structural concerns.

In March 2006, MU noted that building 706 was in an "unsafe condition" and should be closed, but students continued to live there until September of that year.

In May 2013, the university spent $3,840 repairing concrete on the walkway for building 707, the one the collapsed and killed Britt. An investigation by the engineering firm hired by MU said the reason for the collapse to be "concrete shear failure".

Mackey Mitchell architects prepared a report for MU saying University Village Apartments should be demolished because of its poor condition. The report specifically says "renovation is not a reasonable alternative." The 2008 official master building plan from MU describes the building in poor condition including the building structure.

The proposed cost for vacating and demolishing the building was $1.6 million. Estimated costs of rebuild would be more than $15 million. MU chose not to follow through with the suggestions.

But residential life has spent $1.1 million in maintenance on the complex since 2009.

MU spokesman Christian Basi said the costs for demolition were "prohibitive". He said Univeristy Village Apartments was a very popular location for students, and MU did not want to "eliminate that potential option for students when it is used quite a bit." Below is a table showing how the $1.1 million broke down.

Problems noted in the plan include that "deteriorating metal decks are a safety hazard." The plan also documents the apartments as having no sprinkler system or central fire system.

Other building deficiencies listed are:

The day after the walkway collapsed and killed Lt. Bruice Britt, Trabue, Hansen & Hinshaw, Inc. (THH Inc.), the engineering firm hired by MU reported a "catastrophic collapse" could be "imminent" at three other University Village buildings unless remedial action is taken.

Since the report was released, the university installed temporary beams to secure the walkways. Management told residents the temporary fix will stay in place for the next 6-8 months. A permanent solution would follow. Basi told KOMU 8 News there has been discussion of demolishing the complex and that its fate will be decided within the next few months.

One report, from consulting engineers at THH Inc., said some areas of buildings 602, 604 and 709 show a "complete section loss of steel and concrete deck."

The report also said at least portions of the walkway framing in the area "was very questionable."

Basi said the university asked the engineers, "'Could we have known or predicted this collapse?' and they told us even if they had been out there a week before, they could not have predicted the collapse," Basi said.

When KOMU 8 News reached out to THH to confirm that conversation since it was not reflected in any of the firm's reports, the company declined to comment and said all future statements would be made by the university.

After the collapse, residents received the option to break their leases without financial penalty and some started moving out immediately.

The dates of these findings can get confusing. The interactive timeline below chronicles developments and major findings in the documents spanning from 2006 to 2014.

Readers can navigate through the timeline by clicking on the gray buttons that appear when the mouse hovers over the frame; by using their left and right arrow keys, or by using the slider at the bottom of the timeline.