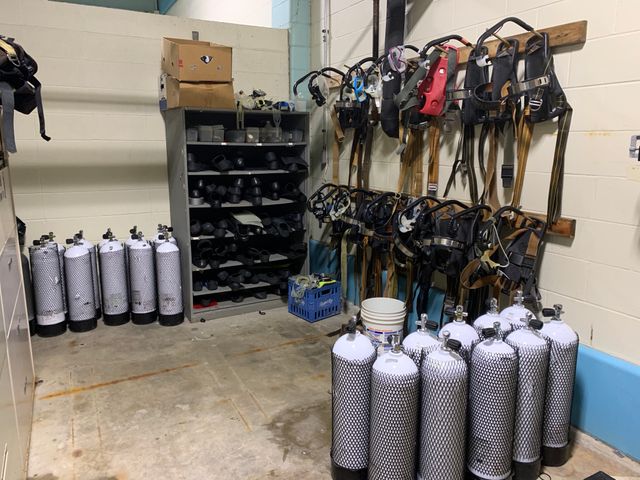 COLUMBIA – Not many 82-year-olds spend their time with people 60 years younger than them, but William Busch isn’t your average 82-year-old.

Busch started teaching a class at the University of Missouri 55 years ago and doesn’t plan on retiring anytime soon. Some people think he is too old to be teaching, but Busch said his job is more than just being a teacher.

“They’re just a pleasant bunch of people that are so motivated… That’s my family.”

Busch teaches Scuba Theory at MU. Over the years, he has been known as “Coach” to hundreds of students.

Busch grew up in an Illinois neighborhood with a backyard that had large lake. This is where he learned to swim and dive.

When Busch went off to college he continued swimming and eventually pursued more scuba diving activities. He said back in the 1950’s and 60’s when he began diving, there was no certification requirement.

Once a basic certification was developed, Busch and a few friends started creating water skills to teach a diving certification class. Their course required 128 hours equally split between the pool and a classroom.

In 1963, the University of Missouri recruited Busch to teach scuba and design a pool to teach in. He designed the pool for his scuba class and for competition swimmers. The pool was demolished in 2005, and is now the parking lot across from Cornell Hall.

Laura Vie is a former student and was surprised to hear the class still existed.

“The thought just came to me, ‘I wonder if they are still teaching scuba?’ At that point I thought Coach was long done,” she said.

Vie has now been a scuba TA for the last 15 years and she says she can’t imagine what life would have been life without it.

“I have no interest in having my life be consumed by work. Scuba gives me an opportunity to do a whole lot of other things,”  she said.

Vie says, when she first returned to the class, Busch didn’t remember her. Their relationship has changed a lot since then. “Oh I think she is great, she is just so tough,” he said.

They share the work of the class by taking on responsibilities the other doesn’t enjoy as much. They both teach lectures on Tuesday nights and help students pass water skills in the mornings. Busch said having another set of eyes on the students is comforting.

“I come to class every morning on Monday, Wednesday, Friday. I just say a little prayer that everything comes out fine today,” he said.

Busch said the skills are tough and many students get frustrated, but when he finally sees a student pass he can’t help but celebrate with them.

“You hear them squeal, but you hear us yell,” Busch said. “They get in there and just keep trying. And boy as long as they keep trying your heart goes out to them and you really want to see them do well.”

However, Scuba Theory may not be around much longer. Each semester enrollment is dropping. Vie said the class wasn’t always like this.

“He used to have 70 to 100 students a semester… back then there used to be a physical fitness requirement,” she said.

Each semester is a new battle to recruit interested students. Currently, 30 students are signed up for the class in spring of 2020. But Vie said a quarter of students drop every semester because the class presents a challenge. Vie said they are doing their best to deal with recruitment.

“Life always throws you curveballs and you just have to figure out what the best option is when the curve is thrown,” she said.

Currently, Busch and Vie are working with different departments at MU to try and get the course eligible for different undergraduate requirements. They want the course to count for a physical or biological science credit, which they think will help incentivize students to enroll. Vie said she hopes next fall they will be able to qualify, but until then the class relies on word-of-mouth to reach new students.

Vie said it is all worth it; the class is much more than just diving. “It teaches you how to handle failure gracefully and how to really ride the high of success. It teaches you what true work really feels like... Scuba teaches more about yourself than it does about scuba diving,” she said.

“It makes them stronger both mentally and physically. To meet challenges, they go out and say ‘Hey I passed that class, I go out and do this’… this really instills in them ‘Hey I got the intestinal fortitude to do it. I can do it, gusto!’ Go for it,” Busch said.