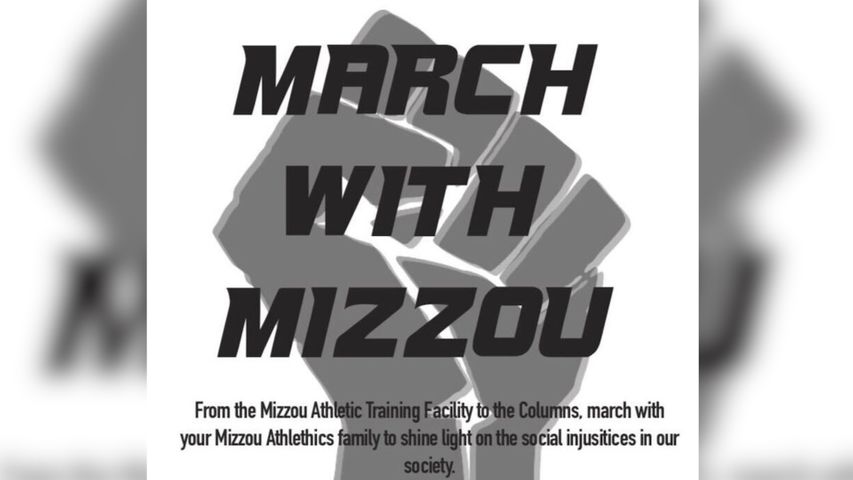 COLUMBIA - On Monday, MU’s Black Student Athlete Association released a statement announcing that the organization is leading a march and sit-in at 6pm on Wednesday, September 2nd.

The statement said, “We, as student-athletes at the University of Missouri feel that nobody at Mizzou has been vocal about the displays of social injustices, police brutality or systemic oppression Black Americans have fallen victim to all summer, and even this past week. We, as student-athletes feel the need to do something.”

This march comes following what the organization said to be the university’s silence in the midst of several displays of social injustice like police brutality and systemic oppression against Black Americans.

According to a second statement that MU’s Black Student Athlete Association released, “The goal of Wednesday’s march and sit-in is to promote unity against the injustices which continue in our nation. As concerned student athletes, it is our desire to help create meaningful change…”

MU’s football team decided to take a break from practice in order to focus on what was best for the team to do in response to the recent event that took place.

“As a team, as a collective unit, we came down to the decision to put practice off on hold for one day just so that we could focus on the task at hand, the bigger picture of things happening in society. As a team we came together and constructed a message that we felt like was best to send out,” current team captain and linebacker Nick Bolton said.

In 2015, athletes led similar protests following several incidents that occurred on MU’s campus. At the time, athletes became involved in order to further push for student demands to be met.

According to former MU safety and team captain, Ian Simon, “The number one goal was to get Jonathan to eat again. Jonathan had made a hunger strike and that was our number on goal. First and foremost was to get him to eat again. Their [the students] goal was to then President Tim Wolfe to resign from the university.”

In support of the football team and other student athletes, MU’s head football coach Eliah Drinkwitz said that the next steps after a practice are putting their plans to action.

The march will begin at 6 p.m. on Wednesday at the Columns and end at Memorial Stadium for sit-in and speeches.