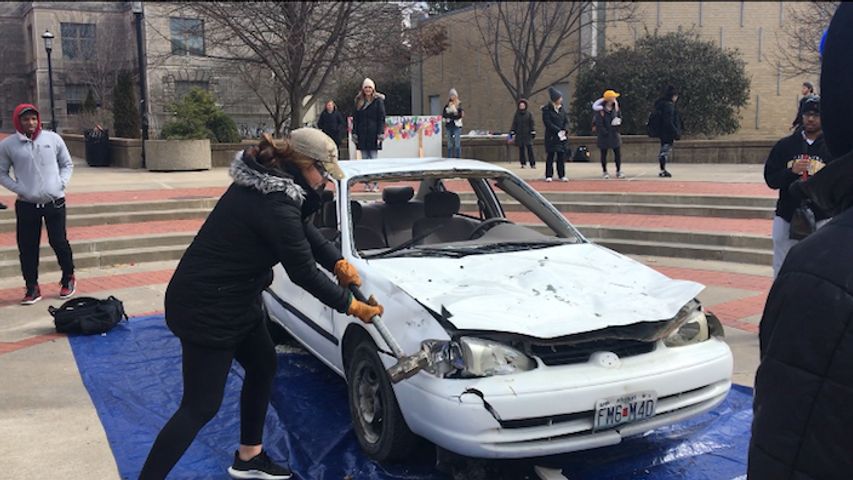 COLUMBIA - Everyone deals with stress in different ways. Some meditate, others go for a run.

Some MU students decided to let go of their stress in a different way – by destroying an old, beat up car.

"Being a college student is just stressful in general, so why not just get that anger out, get that stress out and go to class and have a nice day," Phi Beta Sigma Fraternity, Incorporated Secretary Brandon Rice said.

The fraternity charged one dollar to hit the car with a sledgehammer. They're trying to raise money for the American Cancer Society and also help students let off some steam.

"Stress is one of those things that's universal," Aspire Counselor Jessica Tappana said. "You're going to experience stress at some level no matter what."

Releasing stress through aggressive behavior is getting more and more popular as “anger rooms” are popping up around the country.

Anger rooms provide people with ways to relieve their stress by breaking things like TVs, vases and printers.

Despite the growing popularity, Tappana doesn't think destroying things is the most beneficial way to handle stress.

"While sometimes the physical act can be relieving, it can also kind of heighten the feelings of anger sometimes," she said. "If you're thinking angry thoughts, you might be adding to the anger and you're associating the angry thought with physical release."

Tappana said she recommends other forms of physical exertion like running, pushups and sit-ups. She said those are effective and productive ways to relieve stress compared to breaking things.

However, students who participated in smashing the car don't agree. Some said it was the "highlight of my day" and was "well-needed."

"School does build up a little stress and tension and it did feel good to use the hammer to slam the car," MU student Sean Clemmons said. "For me personally this is helpful. I feel good, I feel relieved."