MU students protest inside Jesse Hall after report of racism 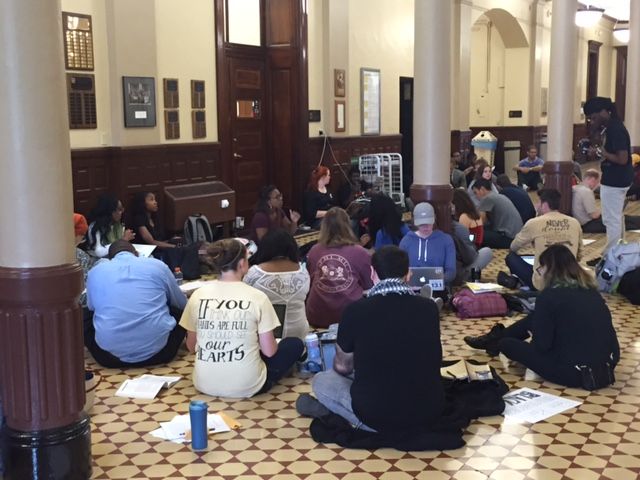 During the event Tuesday, MU officials said they identified the person who said something racist while walking past students of the Legions of Black Collegians Monday. The Office of Student Conduct said it has moved the person from campus pending the outcome of an investigation.

Students at the protest spent their day sitting and studying outside of administrator’s offices.

“The event brings awareness right to their office doors, so it’s impossible for them to ignore it,” said Chris Dades, MU undergraduate student. “They can’t claim that they didn’t know about these issues, about these complaints, because it’s literally right outside their door.”

Chancellor R. Bowen Loftin, who was out of the country this week, responded to the incident with a video message Monday, saying he shared students' outrage.

"It's enough, let's stop this, let's end hatred and racism at Mizzou," he said.

Provost Garnett Stokes said, “Racism and all prejudice is heinous, insidious and damaging to Mizzou. It hurts students’ education and experience including their mental health and academic achievement.  That is why all of us must commit to changing the culture at this university.”

Butler said it’s the administration’s job to enact policies that can change the culture on campus.

“The one strategy we like to push is education within our own peers, so again working with undergraduate peers and graduate peers,” Butler said. “Really starting to have those difficult dialogues so that we can actually start to progress. That’s the main thing we’re trying to do as students.”