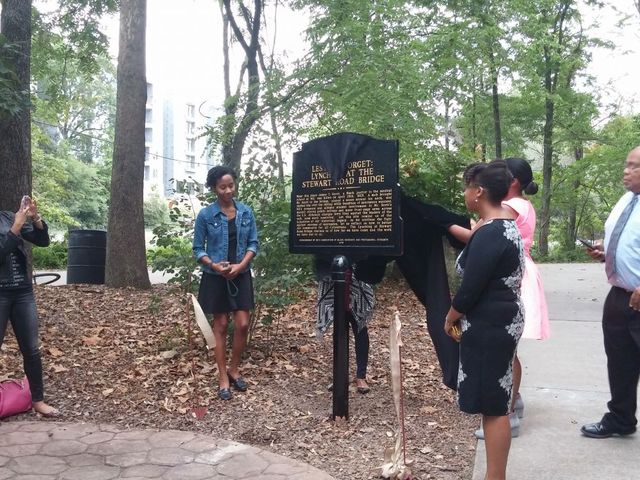 The marker tells the story of former MU janitor James T. Scott. He was lynched by a mob over the Stewart Road Bridge in 1923 after a 14-year-old girl accused him of raping and assaulting her. The bridge is no longer there, so the marker was placed near the intersection of Providence and Stewart roads at the MKT trail head.

Brittani Fults was one of the event's organizers. Fults said Scott's life was cut short because of injustice.

The Association of Black Graduate and Professional Students said people should not forget Scott's lynching.

The association's president, Tiffanesha Williams, wrote this in a post on the association's Facebook page: "Even though people of color are made to feel like they must forgive AND forget not so distant history, including incidents that are less than a decade, year, month, and even day old, we must not forget the punishments meted out to our community, simply for being. Forgetting without restitution or justice is merely inviting an encore."

Fults said the event is important because how you respond to the past affects your future.

A dedication ceremony and reception took place afterward. The ceremony included poetry, a play and lectures about the event and how it relates to current trends in America.

Stephanie Shonekan attended the event. She is the chair of the Black Studies Department at MU. She said ABGPS has done an excellent job focusing on an important moment in Mizzou's history.

Shonekan said, "It is a chance for us to stop and remember what happened and reflect on how the past is still present in many ways."

The marker is titled "Lest We Forget: Lynching at the Stewart Road Bridge." It reads: "Near this place, James T. Scott, a black janitor in the medical school at MU was killed on April 29, 1923. A mob brought Mr. Scott to the bridge, placed a noose around his neck and pushed him over the railing while hundreds of spectators watched. MU's presence and the alleged student involvement in Mr. Scott's murder stirred public outrage and made front page news across the U.S. Although charges were filed against the leaders of the mob, none were convicted. Let this site remind us of the injustices of our historical legacy. As we continue the fight against systems of oppression, let us reflect how to better our community for all Columbians. The lynching at Stewart Road Bridge reminds us of how far we have come and the work we yet to do."

According to a previous KOMU story, ABGPS raised $1,935 for the marker through a GoFundMe campaign. Its goal was $1,500.

The historical marker will be part of Columbia's African-American Heritage Trail downtown.

Plaque will mark the site of last Columbia lynching