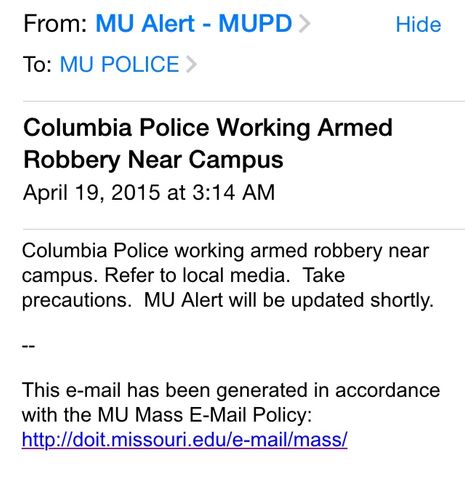 COLUMBIA -While the University of Missouri's emergency alert system was more thorough during a weekend robbery, some people are still unhappy with the way MU authorities notified people of events Sunday morning.

Following the robbery that took place on Hamilton Way on MU's campus, the MU alert system contacted students, faculty and staff quicker than it had during a shooting at Hitt Street garage Wednesday. The system used more methods during the robbery, including a phone call to students and staff.

Some people were unhappy with receiving a phone call around 3 a.m. to alert them of the robbery.

University of Missouri Police Captain Brian Weimer apologized to anyone who was woken up by the 3 a.m. MU Alert phone call.

"It was for the overall safety of the campus. We did what we had to do to immediately alert as many people as possible through the ways that they had chose through the system," Weimer said

After Wednesday night's shooting at the garage, when students complained about not being notified in a timely manner, campus authorities re-evaluated the alert system and implemented changes to its emergency alert procedure.

"We changed things after that to try and get things out a little faster, to say, even if we don't know, we're going to say it's something local that the city police is looking into," University of Missouri Police Captain Brian Weimer said. "We'll give them information to go to local media, and also to let them know as fast as we can that we'll get information up on MU alert as we get the facts."

He said their mission regarding the robbery was to get the information out to as many people as possible, so they erred on the side of caution.

During an emergency that involves a crime near or on campus, once we (News Bureau staff) receive a call from MUPD, we notify staff in our Web Communications group to post an initial alert on MU's online emergency alert website, MUAlert, that contains as much factual information as we know at that time. When a message is posted on MUAlert, that message is also tweeted from the University's official twitter accounts, @Mizzou and @MUAlert.

During the incident that occurred early Sunday morning, the server for the MUAlert system was down. Therefore, we had to call our IT services who worked to get the server back up so that we could post the message.

It's important to keep in mind that we have several ways to convey messages to our students, faculty and staff and when one method may not work efficiently (such as this past Sunday morning), we can utilize the other methods. In this case, we were still able to tweet, text message, email and call. We also rely on you, our media partners who get the Columbia Police Department's press releases and tweets, to help us keep the community informed.

Weimer said people should not opt-out of the alert system just because they are upset over the 3 a.m. phone call.

He said the university is re-evaluating the system again.

"Now, we probably won't use the phone service, especially that time of night unless we can for sure say that it's going to really help keep people safe," Weimer said.