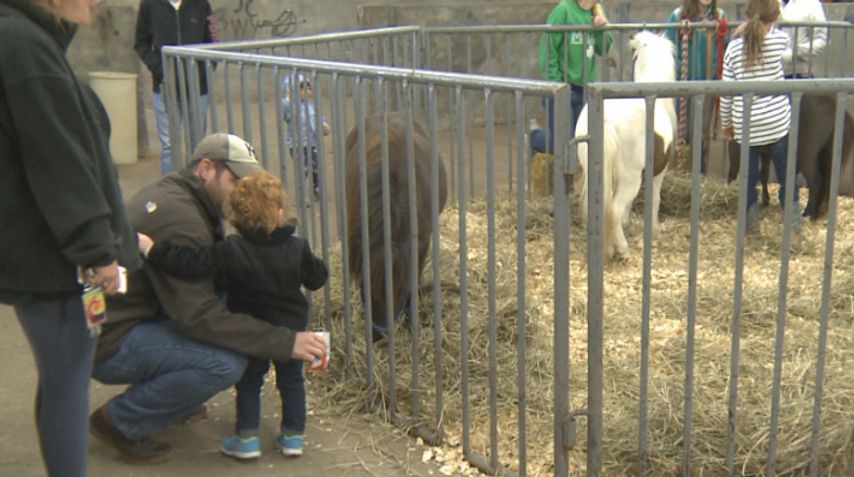 COLUMBIA — Future veterinary students flocked to MU campus Saturday to learn about what the College of Veterinary Medicine has to offer.

But they're not the only ones the event entertained.

Families from across mid-Missouri and other parts of the country attended the event to learn about a variety of animals. Douglas Tindall, coordinator of student recruitment for the college, said the open house was catered to families.

"It is very family-oriented. That's who our target audience is," Tindall said. "We have to really appeal to the kids and try to get them as interested and engaged as possible."

For many of the attendants, young and old, the highlight of the day was a show by the Purina Pro Plan Performance Team, an athletic group of dogs from St. Louis that perform flying disc routines.

The open house also offered a petting zoo with miniature horses, baby goats, pigs and other farm animals. The attendants could walk from room to room in the school to pet and play with cats, dogs and rabbits from places like Boone County Animal Care and the Central Missouri Humane Society. There were even lizards and snakes provided by current students.

Some of the potential students in attendance were able to hear from a panel of current students and take tours of the school. With the number of students on the rise, Tindall said the college is becoming more attractive to people from outside mid-Missouri.

"We get people literally from across the country. I've seen people from Tennessee, Arkansas, a lot of the contiguous states," he said.

Tindall also said since Missouri is a highly agricultural state, many people who attend the school have a farm background.

While there were plenty of fun activities at the open house, Tindall said some of the main goals of the event — in addition to recruiting new students — were to educate the public and thank the college's sponsors.