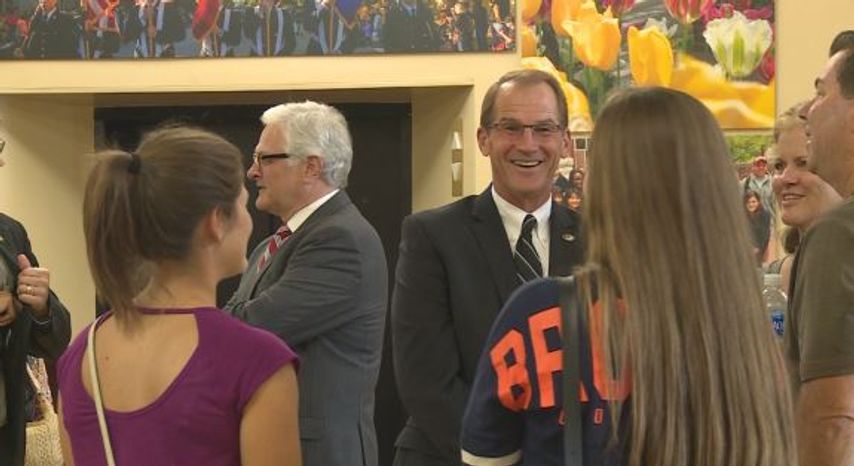 COLUMBIA – The University of Missouri’s new athletic director was welcomed with applause at Jesse Hall on Friday.

Sterk was working as the athletic director at San Diego State University last month when Mizzou hired him.

Foley told the crowd that Sterk’s hire was an important one for the university.

“It’s an important hire for Mizzou, and it really represents a new day for us on campus,” Foley said. “It’s often said that athletics is indeed the front porch of the university. “

Foley explained that by “front porch,” he meant athletics is often the first thing Missourians see when they look at MU.

“We had to get this position right, and I think when we found Jim we did get it right,” Foley added.

Sterk also addressed the crowd in the rotunda of Jesse; he said has already set goals.

“We’re going to build onto past successes, but I think we can raise it to new heights and I’m excited about that opportunity,” Sterk said. “To do that you’re really focused on that student-athlete experience.”

While some may worry about the events that put MU in the national spotlight last year, Sterk said he is ready to move forward.

“Last year was an anomaly,” said Sterk. “Everyone I talked to, that’s not Mizzou, and so that’s what gave me the confidence to come here and help build a brand.”

Sterk is still making the move from San Diego, but said he is excited to be in Columbia.

“I really am honored to represent the state of Missouri, and be at the flagship institution and help this institution move beyond.“