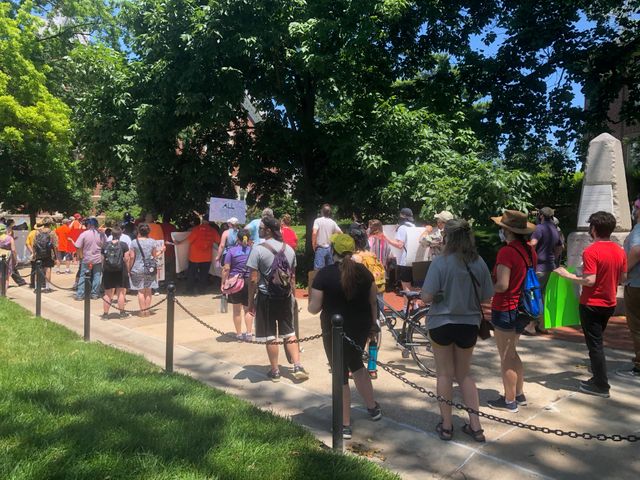 COLUMBIA - MU employees and Missouri union workers marched through MU's campus on Saturday to deliver their list of demands to the Chancellor's Residence on Francis Quadrangle.

Because of the COVID-19 pandemic, the university has made significant layoffs, furloughs, travel bans and spending restrictions. The protest on Saturday consisted of mainly custodial and landscaping employees, who fear their jobs will be outsourced, privatized or cut completely after the pandemic.

Protesters and community members demand the UM Board of Curators not outsource union jobs to lessen the budget gap created by COVID-19. Employees fear by privatizing their jobs, they would lose benefits. Some workers also fear a reduction in wages if they have not already taken a voluntary pay reduction with the university.

Sheila Pittman is a custodian at the University of Missouri. She said the university hasn't been communicating with employees the status of their jobs in these uncertain times.

"I heard through the grapevine we may all be losing our jobs, and that's not fair," Pittman said. "I was asked to turn in my keys and I don't know if I still have a job because no one has told me anything."

Pittman also explained that because she's been working with on MU's campus for seven years, the lack of communication isn't acceptable during hard times.

"They've [the university] has been there for me through my battle with breast cancer and my heart attack," Pittman said. "But COVID is what is going to make me lose my job? Then they need to tell me that and not keep me waiting."

The rally ended at the Chancellor's Residence where organizers delivered their list of demands. The interim Chancellor and President Mun Choi was not at the residence.