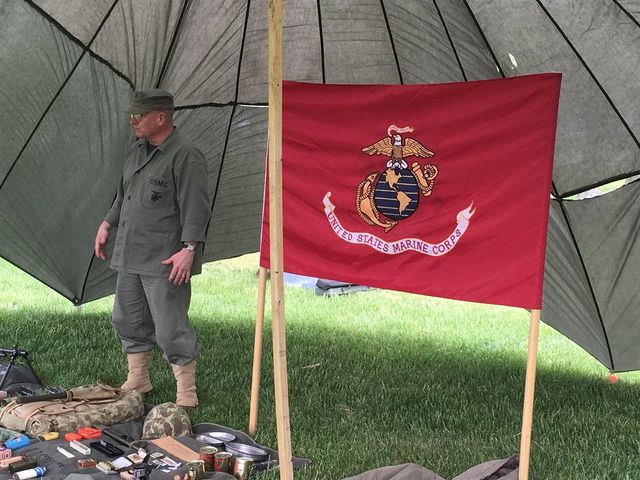 Using soldiers in period uniforms and authentic military artifacts, those who attended the event learned about different time periods in American military history.

“It’s public awareness of our history and a better understanding of some of the different conflicts that the United States has been involved in over the various centuries,” said Charles Machon, Director of the Museum of Missouri Military History.

For the kids who came out to the event, Machon said he hopes the different presentations build off and expand on what they had learned in history class in school.

“In schools, they are so hard pressed to teach different courses of history, geography, math and science,” Machon said. “This is a way to help expand that knowledge and education of children and high school children.”

As much as the kids loved learning about the different periods of military history, the weapons demonstrations were by far the most popular. After not having them the first year of the event, Machon said they quickly became the star of the event.

“Since it was readily accepted as a good turnout and success, we have been expanding these events over the years to now have two weapons demonstrations during the day,” Machon said.

The Museum of Missouri Military History tells the story of America’s military conflicts through the lens of the state of Missouri. The museum has a vast collection of artifact, aircraft and vehicles from every conflict the Missouri National Guard has participated in.

“Most of them are donated by individuals and also throughout the National Guard system and the armories,” Machon said. “They will be moving or renovating and discover historical things.”

Machon said he hopes that everyone who came to the museum for Military History Day leaves the museum with a greater knowledge and a better understanding of military history than they had when they arrived.