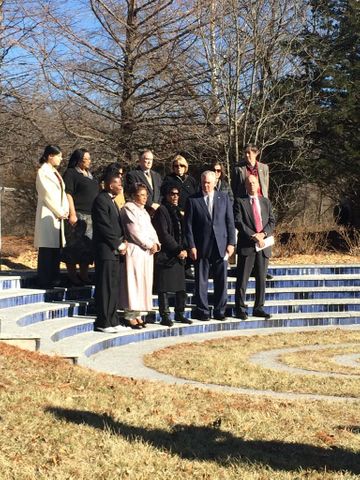 Members of the community met at the Martin Luther King Memorial at Battle Garden for an opening service. Community leaders began the ceremony singing in unison, "Glory Hallelujah."

Columbia's NAACP President, Mary Ratliff, said Dr. King helped have a major push for equality, but there is still much work to be done.

"The fight is not over," Ratliff said. "We thought that we had moved somewhat ahead, but as we have found out with the killing of Mike Brown, and the killings all over the country, that we still have a ways to go before we reach that pinnacle where we can say this is a country for all people, where all people are free and without fear."

Gov. Jay Nixon was also at the MLK Celebration and briefly touched on the relationship between law enforcement and minority communities.

After the ceremony, people drove to Second Baptist Missionary Church for another service.

A free lunch was provided following all of the day's events.