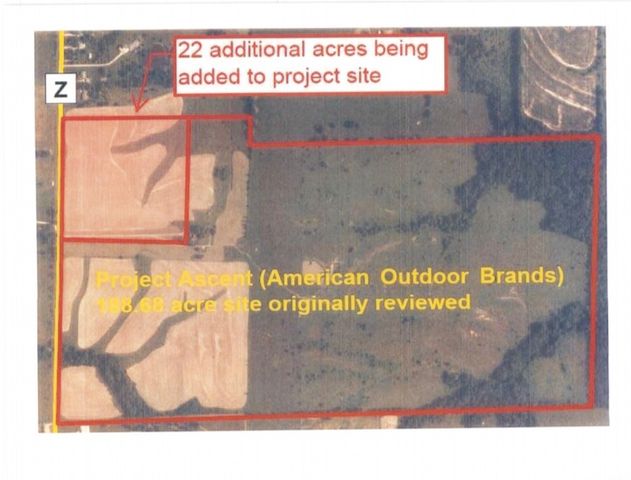 BOONE COUNTY – American Outdoor Brands is a national company coming to Boone County to build a warehouse and distribution center. The company has decided to expand its project site to include an additional 22 acres along Route Z east of Columbia.

Daniel Atwill, Boone County Presiding Commissioner, said the expansion just has to do with the way the company wants to lay out its buildings. He said there will eventually be an office building added to the site.

Katie Patterson owns Glenn Acres Farm across the street from the building site. She said, “We’re really lucky to have a company like them come in and bring so many jobs to Boone County.”

Patterson said she is okay with the expansion and the Boone County Planning and Zoning Commission is “very smart.”

“They know what they’re doing,” Patterson said. “They’ll make sure everyone in Boone County is okay with it.”

“This will have a significant economic impact. This will provide wages that are higher than the minimum here, and they will employ a lot of people,” Atwill said.

An environmental review is required as part of the process to determine if this land can be used for American Outdoor Brand’s purpose.

The review conducted on the original land area ensured the project would not take place over any historic properties, wildlife, or Native American grounds. Ed Siegmund, executive director of the Mid-Missouri Regional Planning Commission, presented the amended environmental review to the Boone County Commission.

None of the groups objected to the project. However, the Apache Tribe of Oklahoma and Seneca-Cayuga Nation did not respond.

The only concern for endangered species was the Indiana Bat, and conditions for approval already took into account mitigation activities for the bat, according to the environmental review.

The next step toward American Outdoor Brands getting to break ground is the Boone County Commission arranging for engineering of the roadway changes on Route Z that have to be made for this project, according to Atwill.

The county “will be involved in the design and correction of the road problems,” Atwill said.

These steps are also part of a process of application for a Community Development Block Grant. The grant is close to $2 million. It is predominately for road improvement for access to the site and I-70.

Once the county’s role with road engineering is complete, there will be building permits and zoning applications that will be processed through the county.

American Outdoor Brands was given a tax break that will save the company money on its real and personal property taxes.

Atwill said after the expansion the county will do what is “appropriate” regarding increasing the tax break or having it remain the same.