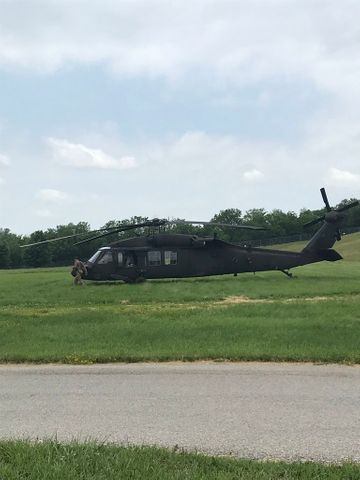 JEFFERSON CITY - The Missouri National Guard moved into Brunswick and Jefferson City to assist with the threat of flooding Tuesday.

"Missouri has been battling historic flooding since March, which is depleting local resources, and now flooding conditions in many parts of the state are only getting worse," Parson said in a news release.

Adjutant General of the Missouri National Guard Stephen Danner said it has sent about 50 soldiers to help with mission.

Most of the guardsmen are in Chariton County near Brunswick where they are preparing sandbags to reinforce a levee at risk of breaching.

Other soldiers are on standby in Jefferson City. They said they are ready to help the Jefferson City Fire Department with any necessary flood rescues. The guard is equipped with vehicles prepared to drive through flood waters.

"Our soldiers all gave up their holiday yesterday because of course you don't just start out with sandbagging."

"So while others were off yesterday cooking hamburgers and hot dogs, the soldiers that are out there working today gave that up to come to the army so they can be prepared to help their fellow citizens today."

The National Guard has also established an emergency operations center at its Jefferson City base where it receives updates on changing conditions and planning its response.